Most of comics were one-shots

Jo only lasted a few months in the Daily Mirror, but such was Bertram’s obvious talent that it wasn’t long before the character began appearing in several one-shot comic books published by Sydney’s Frank Johnson Publications, some appearing under the company’s famous ‘Magpie Comic’ imprint. Published during 1945-46, Jo & Her Magic Cape (as the strip was now known) appeared in such titles as Modern Comics, Dandy, Fearless, Triumph, Universal, Wizard and Wonder. 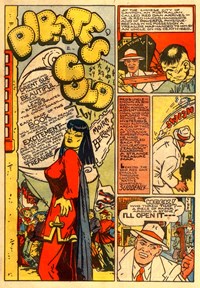 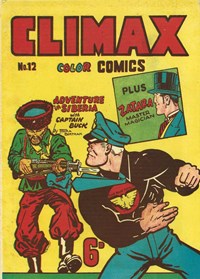 “Most of my comic books published were one-shots. They piled up on the newsagents and my sister and I always got a great kick out of seeing them. I did covers and all.”

If ever an artist’s work deserved to appear in colour, it was Moira Bertram’s. Thankfully, comic book fans got to enjoy several full-colour Bertram comics, which were published in the KG Murray Publishing Company’s groundbreaking Climax Color Comic series, which appeared in 1947-48.

These were: Pirate’s Gold (No. 2), The Runaway Rocket (No. 5), The Red Prince (No. 7), The Sultan’s Treasure (No. 10), Who Stole the Maharajah’s Crown? (No. 11) and Captain Buck: Adventure in Siberia (No. 12). Bertram’s exaggerated and expressive art style is tailor-made for these gaudy four-colour comics, which are as stunning to behold today, as they no doubt were to the kids who shelled out their sixpence for them in the 1940s.

Aside from Climax Color Comics and her one-shot Flameman comic, Bertram’s other series for the KG Murray Publishing Company was Miss Career Girl, which appeared as a back-up strip in some issues of Murray’s full-colour Superman comic.