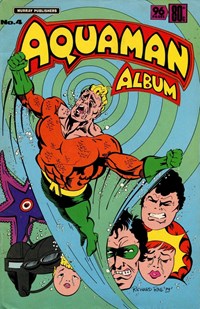 (KG Murray, Australia) When the Album boom of the late 1970s hit, Aquaman briefly recieved his own title following years as a regular feature in Superman Presents Wonder Comic Monthly.

Murray had received contents with no cover art

According to Richard's essay, "The Comic Book Industry in Australia",11Burrows, Toby & Stone, Grant (Editors), Comics in Australian and New Zealand: the collections, the collectors, the creators, Haworth Press:...   he was making one of his regular visits to the KG Murray offices in Sydney, when a golden opportunity arose.

They had received the contents of four reprint titles, without the cover artwork. Knowing that Richard was an aspiring comic artist, they asked him if he would be able to draw some original covers for use on these comics.

Naturally, he jumped at the chance! 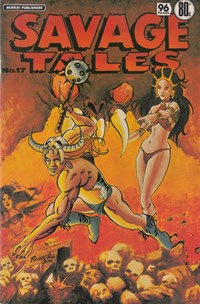 (KG Murray, Australia) included DC features at the time Rae did this cover, but the series sourced mainly Marvel work when it started in the early 1970s.

"The person I dealt with at Murray's was the same woman whom I invited to my convention at the Sydney Opera House in 1986," he recalls. "She was their 'main' comic person—in fact, she was the one who asked me to help them with some covers."

And before anyone asks, Richard cannot, sadly, recall the woman's name. Chances are she may have been the same woman who published the locally drawn comic strip, "A Case of Mistaken Ambulances", which appeared in Super Giant Album 23 in 1975/1976. (For more details, see Peter Fatches—The Mistaken Ambulance Mystery.22Originally published in the "Comics Down Under" column in the August 2005 edition of Collectormania magazine....

Richard's covers for KG Murray included Aquaman Album 4, Savage Tales 17 (with Glenn Ford) and Superman Presents Supergirl Album 35, all of which were published during 1979-1980.

"The fourth cover I did for Murray's was an issue of World of Speed," he adds. "It was the last one I did and it shows in the art—I really hated that comic, and the cover, because it had heaps of car art and no super-heroes.

1
Burrows, Toby & Stone, Grant (Editors), Comics in Australian and New Zealand: the collections, the collectors, the creators, Haworth Press: New York, Norwood (SA) 1994.
2
Originally published in the "Comics Down Under" column in the August 2005 edition of Collectormania magazine.