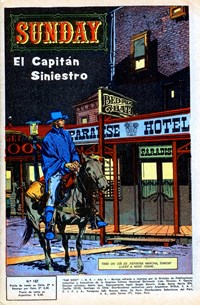 Around 1966-67, Toutain was pursuing what he called "works for syndication",11www.tebeosfera.com....   an approach mirroring the newspaper cartoon industry, where work is produced at the initiative of an artist or agency, not by request from a specific publisher. 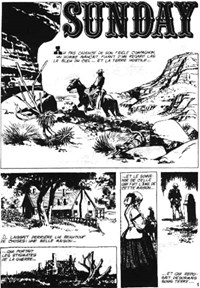 Under this business model, Selecciones Ilustradas could produce and retain ownership for new work, with the publication rights sold to multiple countries at the same time. The approach provides a chance for greater creative control and higher overall profits due to the repeat sales.

It may be no accident that this strategy was a late development. 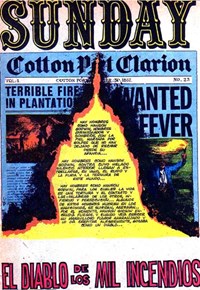 Antonio Martin observes, "This [syndication] was only possible after Selecciones Ilustradas, and more specifically Toutain, had secured a large potential customer base and developed sufficient capital, which allowed it to spend money on its own properties, without being previously guaranteed payment."22"Carlos Giménez y Delta 99: un gran paso para la historieta espanola", an epilog to Glénat's 2007 reprinting of Delta...

Toutain seems to have began his experiment by repackaging existing features created at his request, such as Johnny Galaxia (1959) and Gringo (1963). There is a broader and earlier pattern of global publication for these features, particularly in the French and Chilean markets where Selecciones Ilustradas had established contacts.

The later fame of many of these features' creators suggests Toutain tapped some of his best writers and artists to launch his syndication offensive.