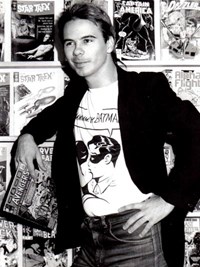 Richard, around the time of his brief stint as a cover artist for KG Murray, 1979-1980. The Batman and Robin t-shirt got a few laughs from the KGM staff, when Richard wore it while visiting their offices. Image courtesy Richard Rae.

A concerted effort for a line of comics 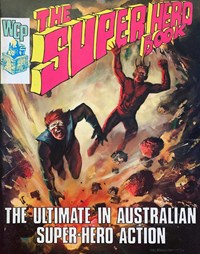 (WCP, Australia 1983) was one of the comics produced in the 1980s by Richard Rae, working with other local artists sch as Hal English and Glenn Ford.

They may not have had a long shelf-life, but Richard Rae's comics represent one of the first concerted efforts by a local publisher to issue a line of Australian comics, since the collapse of Australia's once-booming comics industry in the early 1960s.

If you lived in Sydney during this time, you might have also visited Richard's discount specialty comic shop, "Comic Empire". Perhaps you attended the event billed as "Australia's First International Comic Convention", which was held at the Sydney Opera House on 17-19 January 1986. This convention brought overseas guests such as Will Eisner and Jim Steranko to our shores for the first time, where they were joined by veteran Aussie comic artists like John Dixon.

You may not have known it at the time, but Richard Rae was the principal organiser of that event, too!

Of special interest to fans and collectors of Australian black & white reprint comics is the fact that Richard Rae was (very briefly) a cover artist for KG Murray, the company which published dozens of Australian edition titles reprinting classic DC Comic characters during the 1940s-1980s.