I went to another publisher

After KG Murray abandoned Australian comics in favour of cheaper overseas reprints, Moira, together with her sister Kathleen took the bold step of publishing their own comic book, an adventure series called Red Finnegan (4 issues/c.1949).

The Thrilling Adventures of Dan Eagle 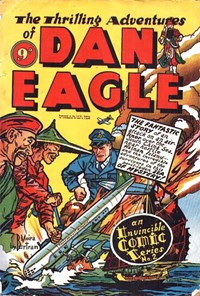 Like the earlier "Captain Buck", Dan Eagle dealt with the exploits of an aviator-adventurer.

“My sister Kathleen [was my single biggest influence]. She was a very good scholar and very, very clever as well as beautiful. I said somebody will have to do all the lettering. ‘I daren’t’, she said, but she did. We always worked together and most of the lay-outs were prepared by her.”

Everything But a Heart 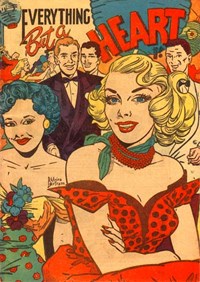 Bertram's cover for a collection of US reprints, probably all from Harvey publications (Calvert Publishing Co. Pty. Ltd, Australia) c.1956.

The Bertram sisters’ fascination with Asia no doubt stemmed from their father’s wool shipping business, which had offices around the world. The two sisters apparently visited Hong Kong some time in the 1940s, where they produced silk designs for Japanese companies!

“I went from one publisher to another with a short synopsis and a well-drawn page, black and white or coloured. They always accepted my work, never turned me away. Newspaper strips, too. 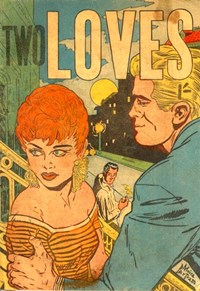 “When one publisher petered out, I went to another, always with success. ‘Who writes the stories?’ one said. I replied ‘I do.’ ‘Well,’ he said, ‘you’re not only a top-class illustrator, you’re a very fine storyteller.”

Asia was once again the setting for Moira Bertram’s next major comic book series, The Thrilling Adventures of Dan Eagle (5 issues/c.1954), published by The Invincible Press, Sydney. Like the Bertram sisters’ earlier ‘Captain Buck’ stories for the Climax Color Comic series, Dan Eagle dealt with the exploits of an aviator-adventurer and his crew. The comic’s unusual layout, with the title appearing in the top panel of each page, suggests it may have been originally conceived as a weekend newspaper strip.