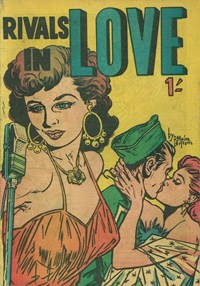 A natural for romance

The mid-1950s saw Bertram working for the Calvert Publishing Company, which was operated by Sydney accountant Denny White during the 1950s and 1960s, and was primarily known for its range of war, crime and romance ‘pulp fiction’ novelettes. 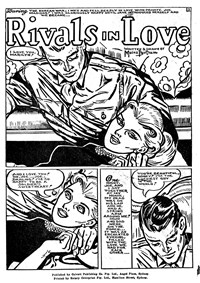 This was followed by a string of one-shot romance comic published by Calvert during 1956-59, which included such titles as Bring Back My Love, Four Tragic Hearts, Rivals in Love, Campus Snobs, My Love for the Yukon Hero and Puppet Romance.

My Love for a Daredevil 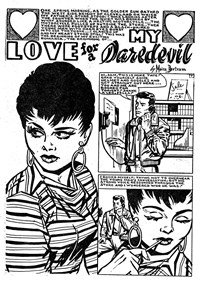 “I did romance stories, done in the same [comic strip] form. I did many of those for a long time, until I turned to other artwork.”

Bertram was a natural for the romance comic genre, with her torrid storylines starring doe-eyed heroines and equally handsome leading men. She apparently contributed comic strips to the Silhouette Romance Library, a series published by Reigate Pty. Ltd. (a comics’ imprint of the Cleveland Publishing Company) during the late 1950s-early 1960s. Bertram is also said to have produced cover illustrations for several Carter Brown mystery novels for the Horwitz Publishing Company. 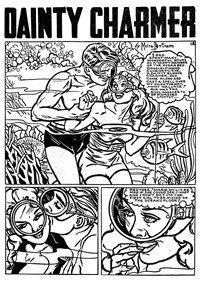 The late 1950s appears to have marked the end of Moira Bertram’s comic book career, at a time when the era of original, Australian-made comics was coming to an end. During this time, she reportedly worked as a freelance illustrator for Australian women’s magazines.

Bertram’s career in Australian comics was, sadly, the exception and not the rule in a field dominated at most levels by men in postwar Australia. Bertram had her own theories as to why this was the case.

“Maybe they’re [women cartoonists] not pushy enough. It takes a lot of grit and guts to get in that field. In my opinion, men today are jealous of a woman’s capabilities and beauty and wish to keep her out [of the comics industry].”

Long after the market for Australian-made comic books had collapsed, the Bertram sisters sustained themselves as artists, creating and exhibiting works from their studio-apartment in the Sydney beachside suburb of Manly. Kathleen worked on landscapes, while Moira specialised in figure studies and portraits.