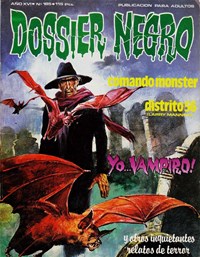 By the mid 1980s, the Spanish comics market was saturated, the economy in recession, new electronic media on the rise and international imports (particularly superhero and manga) were flooding into Spain. 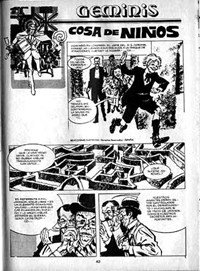 "...It was quite inconceivable that, after so many years trying to dignify a medium that had sunk in the depths of public disregard, it may be demolished or, in other words, face a painful extinction. Overnight, because of international economic recession, we faced dangerous inflation and other impacts. It made paper unreasonably expensive and, with no paper, disgracefully: it was the end of the road. 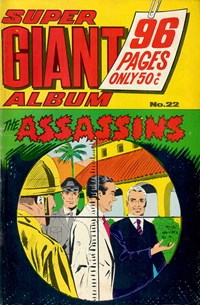 (KG Murray, Australia) 1976, which included Geminis episode 5, was the first issue of that title to include the series.

"...As far as comic magazine publishing is concerned, it had crossed the line of what could be considered sustainable. The distributors, encouraged by several years of substantial profits, encouraged anyone to engage in the publication of any new project. The newstands were bursting with titles, the list incredibly long. Soon, almost without warning, it fell apart like a fucking house of cards. Comic magazines, with some exceptions, were no longer present on the newsstands, until almost all of them stopped being published. This ended one cycle, called the "Comic Boom."11Josep María Beá interview by El tio berni, 10 June 2008, at www.entrecomics.com....

The implosion has been blamed on a "lack of planning, lack of professionalism by the publishers, and excessive triumphalism."22Jesús Cuadrado (1984) quoted at "Historieta en España" at es.wikipedia.org....   During the boom years, publishers and authors failed to engage the general public, leaving only a hard core readership as the economy contracted and new entertainment such as video games emerged. 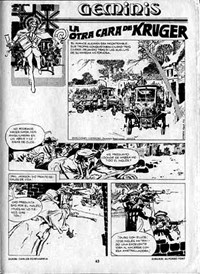 Font negotiated the market contraction by accessing multiple Spanish publishers, producing independent albums and returning the French and Italian market, but Echevarria seems to have been seriously affected by the implosion.

Among the first publishers to close was the new start-up Ediciones Metropol (1983-1984), cutting off the opportunity for Echevarria to complete his series with Joan Boix. Of the other titles publishing his work, Kirk was canceled in 1983; the revived Joyas Literarias Juveniles lasted only a few issues in 1985; Creepy ended in 1985; and Capitan Trueno in 1986 (although these last two were later revived). Dossier Negro, after surviving through 217 issues, several specials and various publishers, ended in 1988.

It is possible Echevarria found it hard to make a living in comics and left the industry, rather than follow the path often used by his Spanish colleagues to other countries and international recognition.