01230
A Case of Mistaken Ambulances 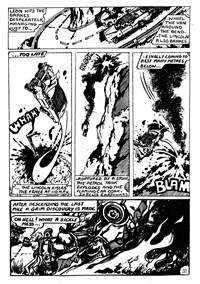 In the end, she left it all in

Peter went to work straight away, choosing a contemporary crime story for his theme. "I was an avid moviegoer and was terribly influenced by American films of the time, like The French Connection."

"The first strip I did was about trucks being hijacked, but she [the editor] rejected it as being too explicit."

Undeterred, Peter went back and dug out a strip he'd done in an old exercise book, titled A Case of Mistaken Ambulances, and decided to revamp it for KG Murray.

"She sent me photocopies of my finished pages, with her suggested corrections and changes."

"We went back and forth with various changes," he adds. "She said the females were drawn too explicitly and didn't wear enough clothing!"

"She also didn't like the swearing and said the car chase went on for too long - but in the end, she left it all in!"

When he saw his comic published in Super Giant Album 23, Peter says he was "beside himself with excitement."

"I asked [the editor] if she wanted another comic strip from me, but she said 'No'," he recalls. "I suspect it may have been too involved a process for her."

Peter stopped producing his own comic strips soon after, but still continued drawing while studying at technical school.

Commencing in 1978, he spent 20 years working as an editorial cartoonist for the Southeast NSW Regional Publishing Group, which published several local newspapers for the region.

Despite being the first Australian cartoonist to be published by KG Murray in over two decades, Peter quickly realised there wasn't a career in Australian comics: "All that effort for the grand total of twenty bucks!"

The author would like to thank Peter Fatches for his cooperation. This article originally appeared in the August 2005 edition of Collectormania magazine. Kevin Patrick can be contacted at PO Box 1055, Camberwell, VIC 3124, or via email at buzzproductions2001@yahoo.com.au.