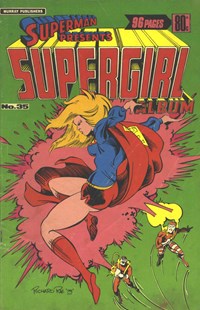 (KG Murray, Australia) shows a lack of attention in later reprints. The title continues from (Giant) Supergirl Albums, but numbering is from Superman Presents Supergirl Comic.

I only did four covers because they did not pay

"I only did four covers because they did not pay local artists, so I did them for free," explains Richard.

"I had a well-paid advertising job [at the time] and comics were my personal interest, so I guess I did them as a 'love job'," he adds. "But after four covers I got jack of working for nothing!"

"I believe that it is important that you do not think of Murray's as a "publisher" when trying to find out how they did things - in reality, they were just [the publishing] arm of a printer. 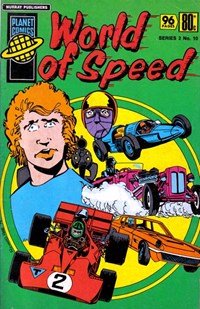 (KG Murray, Australia) is part of the Planet Series, which changed title each issue but included a regular roster of (mainly) Charlton reprints.

"For example, when I was asked to do a cover for Savage Tales, which happened to be the name of a 1970s Marvel Comics title, I was amazed to see that, other than the name, it was all DC stuff inside—to them it was all the same, it was real cut 'n' paste stuff."

Since then, Richard has moved into other fields, but has always retained an abiding interest in comics publishing. Despite his brief involvement with KG Murray, Rae is convinced that there is still a viable market for local reprints of American comics.

"I believe that a fantastic opportunity exists in this country—and has done so for a long time—to combine reprinted, overseas comics, with Australian-made comics," he says. "Kind of like what they did in the UK with Smash, Pow and Terrific comics, back in the 1960s."

But turning that opportunity into a reality isn't as easy as it might sound, as Richard has sometimes learned.

"Last year, I contacted a company which represents Marvel Comics here in Australia, with a proposal to reprint the Spider-Man and Incredible Hulk newspaper strips in comic book form," he explains.

"This project would have meant all-new cover art by Australian artists for these American heroes, plus back-up stories featuring Australian superheroes by local writers and artists.