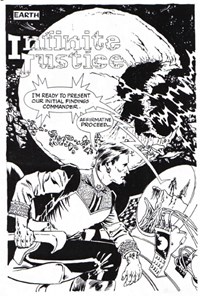 by Richard Rae and William Loebs, from a forthcoming SF comic book project (from www.comicartfans.com).

There is an opening for a new Australian comic group

"Sadly, the project went nowhere, because the spokeswoman I dealt with had no idea about the properties she was paid to represent," says Richard. "In the end, she made it too hard to come to any agreement, so I moved on."

Richard is currently at work on developing a joint American-Australian sci-fi comic. Not only will this comic feature Rae's original stories, but his pencil artwork will be inked by such noted American comic strip artists as Al Williamson and Bill Loebs.

Despite the obstacles he has encountered in relaunching local reprints of overseas comics, Richard remains convinced that such a venture remains commercially viable in the Australian market. 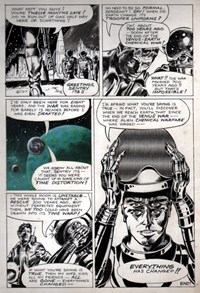 The final page of a two-page story inked by Tom Sutton (from www.comicartfans.com).

"The simple fact is that Australian publishers do a heck of a lot of the same thing, over and over again," he stresses. "If I see another new fashion or gossip magazine come out, then I'm just going to vomit!"

"There is an opening for a new Australian comic group right now—and there has been one for years," says Richard. "But what it needs is a 'real' publisher to back it, and not some backyard job. The key to success is distribution and [marketing] back-up and major publishers have all that.

"Years ago in America, publishers took a chance on Superman—and now American comics and all the marketing they create (movies, games, etc) is a multi-million dollar industry.

"We have just as much original talent right here, right now—and amazingly, not one local publisher will come forward to command a bigger slice of the action. I guess our local publishers are just happy with crumbs and prefer letting the overseas publishers make the big bucks."

Kevin Patrick writes the 'Comics Down Under' column for Collectormania magazine. He can be contacted at PO Box 1055, Camberwell, Victoria 3124 Australia; or via email at buzzproductions2001@yahoo.com.au.