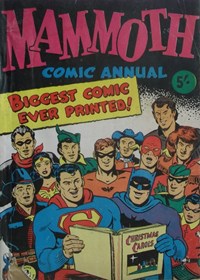 (KG Murray, Australia) One of the earliest rebound issues, a job Don Richardson worked on while at Murray.

The notes of our interview lay untouched

Soon after Don emailed me, we arranged to conduct a phone interview, which took place on 27 January 2004.

My recollection of that lengthy conversation was of an energetic, passionate man who took enormous pride in his craft – and who had more humorous anecdotes to share than my non-existent shorthand skills could commit to paper during our interview.

For various reasons, the notes of our interview lay untouched for some time, as I focussed on other writing projects. Don invited me, via email, in the weeks following our interview, to visit him at his home on the New South Wales central coast, so I could see his surviving comic art covers and advise him on their potential resale value.

Living in Melbourne, I was unable to take up his invitation, but looking back now, I wish I had. Sometime much later, I sent Don an email, apologising for my tardiness, and sought some further information from him. However, my email bounced back undelivered and the telephone number he gave me was apparently no longer connected.

So, I have no way of confirming if Don Richardson is still alive or not, or what happened to his unique collection of pre-press comic book covers.

While I regret not making a greater effort to meet Don, and interview him at greater length, I hope this small account of our conversation might reach him (or members of his family), as well as prove equally interesting to collectors of Australian editions of DC Comics reprints.

Revisiting these notes over three years after they were originally written may result in some lapses in continuity, as I try to reconstruct our conversation and the chronology of Don Richardson's working life.