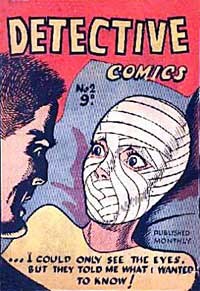 Not a Murray reprint, but possibly an early example of Don Richardson's work.

Don worked for George Woods in the 1950s

Don got his start in the printing industry as a hand-engraver with a Sydney firm known as E.R. Meirch & Morris in 1952.

"They did day bill [large format] paintings for movie posters," said Don. "All the litho [lithographic] retouchers were foreign guys. They used to draw tracings on three litho stones in crayon to print movie posters in yellow, magenta and reflex blue to give a four-colour effect." 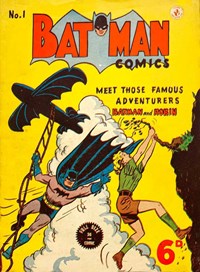 (KG Murray, Australia) While Don reports working on Detective and Adventure, they were probably not Murray's DC reprints.

Don either began, or continued, his printing apprenticeship with another Sydney printing firm, George Woods, which was located near the Tivoli Theatre.

"When I was apprenticed there, they had a comic artist drawing 'Detective' and 'Adventure' comics. The artist was drawing in pencil and he had a girl assistant who would do tracing in ink."

Sadly, Don couldn't recall the name of either the artist or his female assistant. However, it's unlikely that the comic he was referring to was the title after which DC Comics took its name, Detective Comics, even though Batman stories from that title (where Batman made his debut in 1939) may have been reprinted locally by KG Murray in its inaugural Batman Comics title, which debuted in mid-1950. And, while KG Murray did launch Adventure Comics featuring Superboy in 1949, the title was renamed Superboy with the sixth issue. 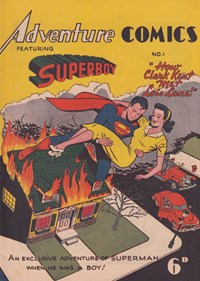 (KG Murray, Australia) The title was renamed Superboy with the sixth issue.

Given that Don claimed he began working for George Woods in the early-to-mid 1950s, it's unlikely that he was referring to either of these KG Murray comic book titles.

The only Australian comic (to this author's knowledge) bearing either of those names was an Australian-printed comic called Detective Comics. The cover reproduced here may have been drawn by an Australian artist and the subject matter suggests that this was a 'true crime'-styled comic book which had no connection with the DC Comic title of the same name.

While its unknown if this title reprinted stories from American comics, it sold for 9d (nine pence), which dates it from somewhere between 1951-56, which certainly coincides with Don's employment with George Woods.

However, the printer listed in this comic was a company called Mentmore Press (Sydney), which printed Detective Comics for a little-known publisher called Crestwood.