012340
Publishers to Clean Up Comic Books

Just after Christmas 1948, during the holiday silly season when newspapers desperately seek copy to fill their pages, the Sydney Morning Herald opened up debate about the impact of comics on young people.11Sydney Morning Herald items in this article are sourced from the Australian Newspapers archive of the National Library of...

The final pages of this article reproduce in full the sensationalist and shallow article that may have helped crystalised popular discontent over comics corrupting Australian youth. It represents a fascinating early skirmish in the cultural tensions that erupted into overt censorship during the 1950s, particularly focused around Fredric Wertham's Seduction of the Innocent, published in 1954.22For further information, see Chapter Three "'A Moral Miasma'? Comics and Censorship in the 1950s" in Bonzer: Australian Comics 1900s–1990s,...

"Several correspondents to the Herald," the 1948 article begins, "Recently protested against the quality (and quantity) of this form of literature sold in Australia."

One such letter from Catherine E. Schmarr of Balmain appeared on 11 November 1948. She writes:

"With the tidal wave of spurious illustrated literature which is flooding the world, what chance have we of teaching our children to think correctly—let alone speak correctly? Who, among us, has not at some time or another, been amazed and shocked at the drawings of practically nude heroines which our youngsters study with such avidity?

"One can foresee a race of illiterate beings dependent upon comics for their mental relaxation, and with their thoughts directed into unnatural channels. For every three boys or girls who admire the 'goodies' there is always one who hopes the 'baddies' win out—and it is this one who usually finds himself in trouble as the result of too much comic reading."

The negative and fearful perspective of young people that underpins this letter is reflected in many newspaper articles at the time.

On Monday 13 December 1948, for example, retiring CIB Chief Superintendent ND James is reported as stating that crime rates are down, but he "expressed concern at the growing number of crimes committed by youths. He blamed the lack of parental control and the tendency of some parents to allow their children to live beyond their means."

A follow up letter on comics from Gwen Harrowsmith of Balgowlah, published 16 November, commends the Herald: 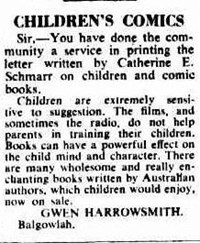 You have done the community a service in printing the letter... Children are extremely sensitive to suggestion... There are many wholesome and really enchanting books written by Australian authors, which children would enjoy, now on sale."

This contribution should be treated with some skepticism, as Gwen Harrowsmith authored illustrated children's books during the 1940s.33Hoppity's House and Dinty are at the National Library of Australia. Her publisher was Consolidated Press (The Australian Women's...   Her perspective, particularly use of the term "Australian authors", suggests a vested rather than casual interest in (foreign reprint) comics. Even so, this exchange of letters reflects a growing Australian concern about comics, no doubt fuelled by reports of a substantial outcry in the USA.

In a small article earlier that year on 2 July, the Herald had reported on the 1948 code developed by the the Association of Comics Magazine Publishers, a precursor to the well-known 1954 Comics Code Authority.44For further information see en.wikipedia.org,...   "Fourteen major publishers of comic books in America have adopted a code of minimum editorial standards," the report began. It proceeds to summarise the code as restricting sympathetic depictions of crime; signs of sadistic torture; sexy, wanton comics; or vulgar and obscene language, with slang kept to a minimum.

Similar reports appeared in other Australian newspapers at the time. A headline in the The Canberra Times screamed on 15 October 1948 that "US Druggists are Pedlars of 'Gutter Muck'".

In that article, Mr John Tripenny (oddly described "the President") called on "retail druggists, who sell the bulk of magazines and comics, to cease dealings in comics that are nothing but 'gutter muck'… He said it was a tragic fact that many druggists are peddears of such muck. Parents and religious leaders were aroused over the sinister influence some of the so-called comic books have on boys and girls, he added."

1
Sydney Morning Herald items in this article are sourced from the Australian Newspapers archive of the National Library of Australia.
2
For further information, see Chapter Three "'A Moral Miasma'? Comics and Censorship in the 1950s" in Bonzer: Australian Comics 1900s–1990s, Ed Annette Shiell (1998: Elgua Media, Australia).
3
Hoppity's House and Dinty are at the National Library of Australia. Her publisher was Consolidated Press (The Australian Women's Weekly), which was also involved in the comics industry, notably with The Australian Chucklers' Weekly but also US reprints such as Mandrake, Dick Tracy and Buck Rogers. In the late 1960s and early 1970s, Harrowsmith wrote for Signs of the Times, a Seventh-day Adventist magazine, suggesting that she held more conservative views on family and entertainment than the average Australian.
4
For further information see en.wikipedia.org,