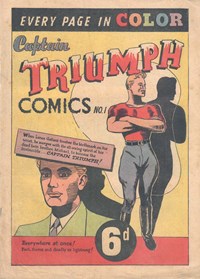 In response to the concerns, an anonymous Herald "staff correspondent" grabbed 20 comics from a local news stall and dashed off a ripping piece of sensationalist tabloid journalism, backed up by the inevitable "vox pops" with a concerned mother, an psychiatrist espousing expert opinions, and some bemused teen-agers largely wondering what all the fuss is about.

Most of the 20 comics didn't rate a mention in the article, but five face detailed criticism for showing an "unmistakable United States origin", "murdering the King's English", encouraging the "technique of dictatorship" and generally unleashing moral decay among young people. Many of the the concerns reflect the list of issues cataloged in the July Herald story about the Association of Comics Magazine Publishers, particularly an explicit mention of "sadistic incidents".

The Man Who Robbed the Mint (Superman) 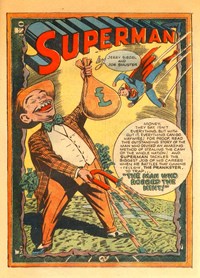 An example of Australianised content, from Superman All Color Comic 5, 1947 (KG Murray, Australia).

The five "problem" comics include KG Murray's Captain Triumph, Atlas' Garth, Fitchett's Hurricane Hawk and HJ Edward's Tim Valour. None of these series are particularly shocking or subversive, especially compared with more extreme horror, crime and war comics that fuelled opposition in the US.

In general, the journalist shows ignorance of the comics involved, using them selectively to produce apparent support for the case against comics, with little regard for the individual stories or the series' different histories and nuances.

While "the language used in many of the comics… shows an unmistakable United States origin", one of the comics singled out for criticism (Tim Valour) was Australian produced while another (Garth) was sourced from the UK. 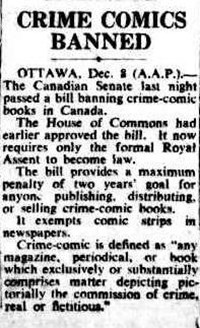 In the journalist's view "Hurricane Hawk introduces a southern United States dialectal note", but the report overlooks the title's decade-long Australian publication since 1938. Throughout that time, it was written and drawn by generally the same creators in a consistent style.11Hurricane Hawk was created as Skyroads by aviation pioneer Lester J. Maitland and Lt. Dick Calkins, an ex-Army Air Service...

The Beezy Bumble story, which has its language attacked for excessive US slang, is cloaked in irony. The characters quoted appear foolish by the end of the story—specifically because of these comments and subsequent actions.

Beezy, a teen humour story, is a jarring inclusion in a report that focuses on comics being dominated by stories where "'supermen' of various types clash with tyrants and criminals", "sadistic incidents" and "atomic devastators".

The Man Who Robbed the Mint (Superman) 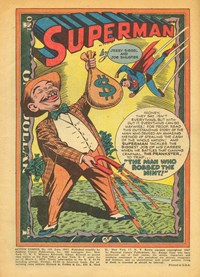 Despite repeated concerns about the "King's English", KG Murray (and some other publishers) routinely Australianised its language and content, such as changing "jail" to "gaol", incorporating Australian place names, and replacing US dollars with pounds. Much of the time, these changes were clumsy and obvious.

Significantly, there is no mention of stories or comics that might not support the article's negative thesis. On the shelves at the time would have been issues of Superman (KG Murray), Captain Marvel (Vee Publishing), Fatty Finn (Fatty Finn Publications), Middy Malone’s Magazine (Fatty Finn Publications), Ginger Meggs/Sunbeams Book (Associated Newspapers Ltd), The Phantom (Frew), and other comics that have had enduring appeal in Australia.

And the only voices defending comics in the article are teenage boys who sound niaive—if not outright brainless—proving the point that chidren are impressionable and don't know what's best for them.

It is hard to escape the conclusion that the author has conflated the comics medium with the humour genre, particularly when the article leads off with the conclusion that, "current illustrated stories for juveniles are becoming increasingly sombre, bloodthirsty, and unhumorous in tone. The traditional comic is a piece of illustrated whimsy or slapstick, calculated, because of its simplicity, to appeal to unsophisticated minds."

While there is some focus on concerns about growing violence and sex, the real battle lines seem to be around emerging societal shift in focus from Britain as "mother country" to the US, and the culture shock of growing interest in science fiction, fantasy and the (then) new superhero genre.

1
Hurricane Hawk was created as Skyroads by aviation pioneer Lester J. Maitland and Lt. Dick Calkins, an ex-Army Air Service pilot who later drew the Buck Rogers comic strip. Maitland and Calkins collaborated until 1933, when Calkins' assistant, Russell Keaton, took over the writing and artwork. Keaton remained until the end of the series in 1942. See en.wikipedia.org.