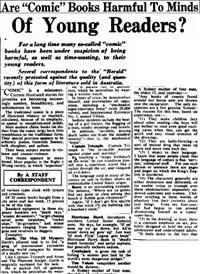 Are "Comic" Books Harmful to Minds of Young Readers? Part 1

By A STAFF CORRESPONDENT

For a long time many so-called "comic" books have been under suspicion of being harmful, as well as time-wasting, to their young readers. Several correspondents to the "Herald" recently protested against the quality (and quantity) of this form of literature sold in Australia.

The Quest of the G-Ray

in Garth 4 (Atlas, Australia) is possibly the story referred to in this article.

"Comic" is a misnomer. Current illustrated stories for juveniles are becoming increasingly sombre, bloodthirsty, and unhumorous in tone. The traditional comic is a piece of illustrated whimsy or slapstick, calculated, because of its simplicity, to appeal to unsophisticated minds.

Most modern comic books (as distinct from the comic strip) have little resemblance to the traditional form. Their special province appears to be arbitrary justice, futuristic fantasy, bulk slaughter, and sadism. Their basic subject matter is violence and counter-violence.

This theme appears in many forms. Most popular is the Right v Wrong variety, in which "supermen" of various types clash with, tyrants and criminals. 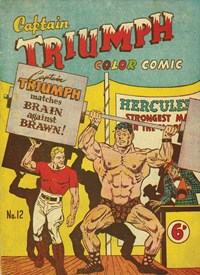 Garth, The Man of Mystery: Garth's allotted task is to foil "a gang of international extremists plotting world conquest by means of a deadly new ray." Like Captains Triumph and Atom and The Phantom Knight, Garth is magically equipped for his task. He is packed full of gamma rays, which he neutralises by wearing a wristlet watch. In times of crisis, he deneutralises himself, and overwhelms all opposition, including a "mechanical super-electronic brain" (with 20,000 valves), and International Extremist No. 1, named Villani.

Sadistic incidents include the beating of a girl (twice), the flogging of a man, sundry shootings and brawls. In addition, "invisible, searing death lashes out from the mindless monster"—that is, the mechanical "brain".

Captain Triumph: Captain Triumph is "the invincible warrior against crime and injustice." By touching a "magic birthmark on his wrist" he can transform him- self into a, superman, travel like a rocket through the air, and vanquish all evil-doers. The language used in many of the comics on sale in Sydney shows an unmistakable United States origin. 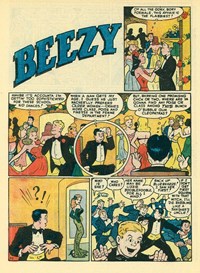 Beezy is an outstanding example. For instance, "Where are ya gonna find any poise or class among this bunch o' bubble gum Cleopatras?" Again, "If I don't get first, squirm with that witch I'll die babbling like a banshee's uncle."22Strangely, Beezy isn't a title in its own right, rather a feature in KG Murray's Captain Triump. The particular...

Hurricane Hawk introduces a southern United States dialectal note. He says, for example, ' If yo' nose up yo' go down, but Ah'm nosin' down an' goin' up' Just wait 'til mah Flyin' Legion gets heah'" Hurricane Hawk deals in "deadly bomb formulas" and aerial exploits, but generally eschews sadism

Crackajack33This comic could be the Crackajack backup by Michael Trueman that appeared in Captain Atom by Arthur Mather (Atlas,...   is given the task of foiling "a sinister plot laid by the world's most dangerous midget".

Tim Valour vanquishes another would be dictator.

1
The original article is sourced from fascinating Australian Newspapers archive of the National Library of Australia.
2
Strangely, Beezy isn't a title in its own right, rather a feature in KG Murray's Captain Triump. The particular episode referenced here was in A Climax Color Comic 13, which included some Australia material.
3
This comic could be the Crackajack backup by Michael Trueman that appeared in Captain Atom by Arthur Mather (Atlas, Australia). It is could also be an Australian reprint or title variation of the US Crackajack Funnies (Whitman, US) that was published 1938-1942.