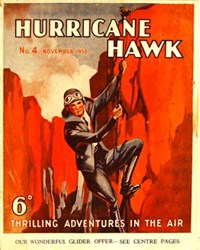 An early Australian comic based on newspaper strips

Until the 1980s, Australian access to international comics was limited due to a range of factors, including distribution monopolies, exclusive licences, geograpical isolation, cultural bias toward British publications and war-time import restrictions.

During and following the second world war, a thriving local comics industry developed, including the publication of thousands of reprint comics. At the start of the 20th century, British material had dominated the Australian market. The earliest comics were modeled on British weekly newspaper-style comics, until the US format and US sources began to dominate in the 1940s.

The earliest reprints were largely based on newspaper strips, such as Hurricane Hawk (Fitchett/Southdown), Garth (Atlas) and Buffalo Bill (Horwitz). The Yaffa Syndicate, established to distribute King Features strips such as Flash Gordon, also entered the comic book market. The longest running of these newspaper strip reprint comics is The Phantom, first published in 1939 by the the Australian Women's Mirror and still produced by Frew Publications.

In the late 1950s the comic market contracted, leaving the industry dominated by a few large publishers focused mainly on reprints and, increasingly, US superheroes. The introduction of television in 1956 drove the decline, but many publishers also could not adapt to tighter censorship from 1954, changes to currency exchange controls from 1959 and the elimintion of import restrictions in 1960.

The late 1960s and 1970s saw some revitalisation with translated spanish comics (syndicated globally in many languages), UK reprints (including pocket size formats) and a new wave of adult US material from companies such as Eerie, Seaboard, Skywald and Warren. Despite that, the market was dominated by superhero (DC and Marvel) and children's humour (such as Gold Key) titles.