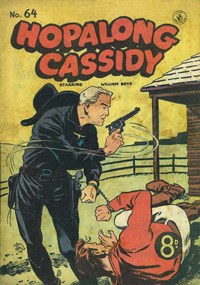 Moving on from Fawcett

To Cleland's detriment, Fawcent decided in 1953 that comics were no longer an attractive venture. The US comics' market was in a downturn, comics' censorship was growing, and Fawcett's long-running and expensive legal dispute with DC seemed likely to continue. 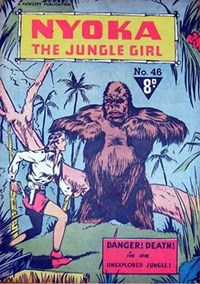 While Fawcett had repeatedly defended its rights to Captain Marvel, DC continuously appealed claiming a breach of Superman's copyright.11See, for example en.wikipedia.org and the Fawcett Comics Story....   In 1953/54, Fawcett sold most of its properties to DC. 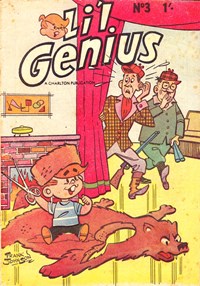 Other Fawcett properties were acquired and published in the US by Charlton, such as Lash LaRue, Nyoka and Hoppy the Marvel/Magic Bunny. Some of these continued series (such as Lash LaRue) transfered from Cleland to other Australian publishers, but Cleland continued to reprint at least Charlton's Nyoka.

Fawcett's only comic after this time was Hank Ketcham's Dennis the Menace, a series that was also reprinted by Cleland later in the 1950—but including at least some material from other publishers.

In the UK, faced with the loss of popular Fawcett titles, L. Miller and Son successfully establish its own version with Marvelman (1954-1963). Cleland took a less successful course, briefly moving to commission new local material and to reprint stories from other US publishers.

New Charlton reprint series at this time were predominantly licensed TV, film and radio properties (such as Frank Merriwell at Yale, My Little Margie, Li'l Genius). As with its Fawcett reprints, Cleland again distinctively used the words "A Charlton Publication" on the cover, acknowledging the source and associating itself with a US publisher.

1
See, for example en.wikipedia.org and the Fawcett Comics Story.