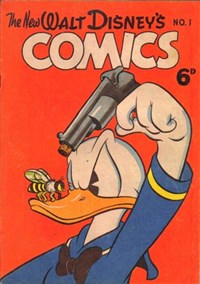 John Sands published a few Disney comics in the 1930s, with a handful more by Ayers & James in the 1940s. The Australian Woman's Weekly also published at least one in the 1940s, with free promotional comics from Nabisco (Wheaties) in the 1950s and Mobil in 1964.

After Wogan ceased publication, US printed comics were distributed in rebound editions with new Australian-printed covers until the mid 1980s. There was a short-lived revival Australian published Disney comics by Magman International in 1984 and later attempt by Otter Press in 2004/05.

However, the dominant figures of Australian Disney comics are Walter Rogan Granger and his son, Walter Arthur Granger—the "WGs" behind W.G. Publications, and personal representatives of Walt Disney in Australia.

Walt Granger Sr was sales promotion manager for John Sands Ltd in the 1930s.11See for example p.10 SMH 17/10/1933. The item reports an impending trip by Walt Granger Sr to the United...   The Sands family company had been founded 1837 as an engraving and stationery business in Sydney, but expanded into board games and greeting cards in the 1920s, and opened branches across Australia from the late 1930s.22See John Sands website. The company was family run until 1978. John Sands established a partnership with American Greetings... 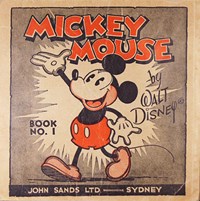 Granger Sr appears to have been an advocate of innovative marketing. He extolled the virtues of packaging to support the sale of products;33See p. 8 SMH 28/2/1934 "Mr. W. R. Granger, sales promotion manager of John Sands, Ltd., who returned from...   worked with Queensland pinapple growers to promote the industry;44See p. 42 The Queenslander 10/9/1936. "Queensland pineapple growers are sitting on a river of gold if they can...   proposed strategies for the promotion of tourism in Australia;55See p. 2 The Canberra Times 1/5/1936. "Cities Not Much Encouragement to Tourists ...The publicising of large industrial cities...   and helped revive St Valentines Day in Australia.66See p. 10 SMH 22/12/1936 "Representatives of the Retail Traders' Association, confectionery manufacturers, and others, adopted a proposal to...

In 1935, Walt Granger used a speech to the Millions Club77The Millions Club (renamed the Sydney Club in 1963) was established to accelerate British migration and make Sydney the first...   to argue that "Mickey the Mouse" and "Min" had a psychological benefit for stressed adults and provided moral lessons for children.88See p. 11 SMH 2/5/1935 "Mickey the Mouse. Means of Relieving Worry. Psychologists' Opinion. Mr. W. R. Granger, in...   This was not just a casual social engagement, but reflected his early marketing of Walt Disney products.

1
See for example p.10 SMH 17/10/1933. The item reports an impending trip by Walt Granger Sr to the United States with Robert A Sands—the grandson of the company's founder, son of then managing director Colonel Robert Sydney Sands, and future general manager.
2
See John Sands website. The company was family run until 1978. John Sands established a partnership with American Greetings in 1949 and was ultimately acquired by that company in 1996, becoming a fully owned subsidiary.
3
See p. 8 SMH 28/2/1934 "Mr. W. R. Granger, sales promotion manager of John Sands, Ltd., who returned from a visit to the United States by the Monterey, said that … America had made great progress in the merchandising and packing, and most manufacturers were using package design to support the sale of their products. By a low freezing process, vegetables and fish were transported in special cars to towns in the middle west, where depots sold food products in fresh condition. Beer was being packed in tin cans instead of in bottles by the two largest New York breweries. Motor oils were also sold in cans to prevent, "bootleg" oil being sold to the consumers. Advertising was taking a new lease of life as the N.R.A. codes had stabilised prices."
4
See p. 42 The Queenslander 10/9/1936. "Queensland pineapple growers are sitting on a river of gold if they can deliver the goods, according to Mr. E. H. Davis, who is making a cursory survey of the pineapple producing countries of the British Empire. With Mr. W. R. Granger, an executive officer of John Sands and Co. Ltd., he intends spending a month investigating the possibilities of Queensland pineapples."
5
See p. 2 The Canberra Times 1/5/1936. "Cities Not Much Encouragement to Tourists ...The publicising of large industrial cities does not attract the overseas tourist, who is 'ever on the search for something new and different, and so far as Australia is concerned is far more interested in the rolling plains, the great Australian bush, the kangaroo, kaola bear, emu and places of historical interest or beauty,' said Mr. Walter R. Granger, Sales Promotion Manager of John Sands (Ltd.), yesterday… Mr. Granger recently returned to Australia after an extended business tour of the United States and Canada, where he had taken a close interest in the various schemes adopted there for the advertising of places of interest. If he had his way, said Mr. Granger, some slogan such as 'Canberra for Honeymoons,' would be adopted and exploited…”
6
See p. 10 SMH 22/12/1936 "Representatives of the Retail Traders' Association, confectionery manufacturers, and others, adopted a proposal to revive St. Valentine's Day, which falls on February 14. The success of the revival in America was described by Mr. Walter R. Granger, of John Sands, Ltd., who urged that if the day was revived In Australia efforts should be made to eliminate all form of satirical or facetious expression, which had caused the ceremony in the past to lose its sentimental significance. Those present undertook to co-operate in the preparation of suitable valentines, which will take the form of cards, love missives and special boxes of confectionery. Special shop window displays will be arranged."
7
The Millions Club (renamed the Sydney Club in 1963) was established to accelerate British migration and make Sydney the first Australian city to reach a population of one million. It founded the Big Brother Movement in 1925, which offered mainly underprivileged British youth the adventure of coming to Australia, providing them with farming skills and a mentor until the age of 21. The club was a pro-business patriotic organisation that included many leading politicians and businessmen.
8
See p. 11 SMH 2/5/1935 "Mickey the Mouse. Means of Relieving Worry. Psychologists' Opinion. Mr. W. R. Granger, in a lunch-hour address at the Millions Club yesterday, told how Walt Disney's two imaginary figures, 'Mickey the Mouse' and 'Min,' on the screen had a psychological effect in removing mental strain suffered by adults, and in offering moral lessons to children throughout the world. Disney, he said, conceived the 'Mickey the Mouse' idea from the Australian, Pat O'Sullivan, whose 'Felix the Cat' became world renowned. Felix, however, was just a cat, while Disney had made 'Mickey the Mouse' an individual, whose antics not only amused and lifted worry from millions suffering under mental strain, but gave the despondent the urge to make just another attempt to over-come difficulties that had seemed insurmountable. Throughout the world people hummed 'Mickey the Mouse' refrains, and, in the humming, that set, anxious mask, which reflected mental stress, was replaced by smiles. Disney, through the antics of an imaginary mouse, was having an effect on the people which proved, according to psychologists, that it was often the little things in life that removed the heavy cares which not infrequently made the individual despair of the future.”
9
Granger travelled to the US for John Sands from October 1933 (p. 10 SMH 17/10/1933) to February 1934 (p. 8 SMH 28/2/1934), with another trip ending just prior to his speech to the Millions Club in 1935 (p. 5 SMH 30/4/1935)