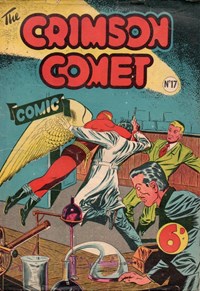 John Dixon—best known for Hawk and the Flying Doctors—began a long association with Edwards when the artist's route took him past the offices of H. John Edwards while on the way to competitor, Frank Johnson Publications.

Dixon drew over 150 issues of Tim Valour for Edwards, as well as 50 issues of The Crimson Comet. He produced numerous short fillers and covers, and followed Albert De Vine as artist on the long running The Adventures of Biggles, based on the works of Capt. W.E. Johns.11p.85, John Ryan Panel by Panel....

The Adventures of Biggles 1 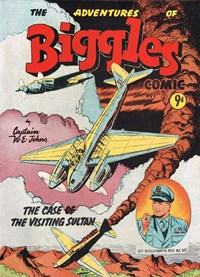 Biggles proved profitable for Edwards, with issues (mainly by De Vine) licenced to Strato Publications for reprints in the UK. The success prompted Edwards to create a spin-off, Gimlet, based on Johns' 10 children's books about Captain Lorrington 'Gimlet' King, a British commando. Artwork was initially by Royce Bradford and later taken over by Jeff Wilkinson as artist and writer.