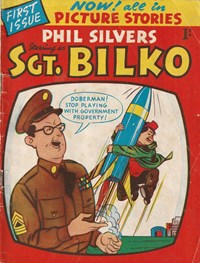 A rare DC reprint series not published by KG Murray.

The one I've just noticed is Phil Silvers Starring as Sgt. Bilko, published around 1958 by Jubilee Publications. Jubilee is part of the Magazine Management group, which includes publishers such as Rosnock, Junior Readers, Regal and Red Circle.

Those publishers began a program of television-related comics soon after TV was introduced into Australia (16 September 1956). Covers were prominently branded 'Television Picture Stories' and the issues featured popular shows of the period such as Gunsmoke, Cheyenne, Bonanza, Maverick, Man from Wells Fargo, Rawhide and Sugarfoot.

The Phil Silvers Show was one of the earliest programs on Australian television and the first popular comedy. It screened on Channel 2 ABN as early as January 1958 and, as broadcasts were progressive introduced across the country, featured in the first night of programming for a number of stations (for example, ABC Perth on 7 May 1960).

I've been aware of this Australian series, but hadn't put the dots together. In my defence, I've never read either the Australian or US series, so didn't look closely until I went to add it to AusReprints.com. These TV reprints were usually sourced from Dell, although other stories were sourced from Harvey, Fawcett, Quality and more obscure US publishers.

Off the top of my head, the only other DC series reprinted by unexpected Australian publishers are some issues of:

Flippity and Flop, published by Frew.

The Adventures of Dean Martin and Jerry Lewis, published by Frew and later Page.

Are there any others?

I've excluded series that DC took over from other companies, such as Captain Marvel and Hopalong Cassidy, which were originally published in Australia by Cleland, but not at the time DC had contol. However, a special mention should go to Blackhawk, which continued to be reprinted by Youngs Merchandising for a while after the character transferred from Quality to DC.

Notably, the three series I know that escaped the exclusive arrangement between DC and KG Murray are all licensed properties. Most likely the copyright owners had influence on the foreign reprint rights.