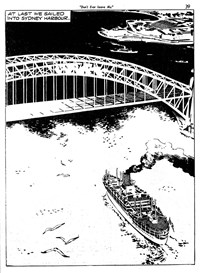 Sydney Harbour in the mid-1960s

Particularly interesting is the empty peninsula where the Opera House is now, with Farm Cove beyond. The former Fort Macquarie Tram Depot was demolished in 1958 and work began on the Opera House March 1959. The crane in the drawing would be working on the project's fist stage.

The art is by Jesús Blasco, part of Spanish Selecciones Ilustradas agency that supplied art for numerous UK comics and syndicated work internationally (including Australia's Ringo and Johnny Galaxy). While agency colleagues such as Fernando Fernández, José Gonzales, José Bea and Auraleón became famous in the US via Warren's horror magazines, Blasco is largely unknown there. His only two Creepy stories were incorrectly credited.

In line with the stunning detail, the picture shows the artist was probably working from a photo reference and doesn't know Sydney Harbour. As the caption indicates, the ship is arriving in Sydney—but from its position and direction, it's leaving! It's possible the ship is intended to be heading west, but the peninsula doesn't look like Blues Point with Berrys Bay beyond.

It's easy to imagine the artist clipping the photo from a newspaper or magazine of the day, part of the wave of publicity surrounding the construction of the new Sydney Opera House.