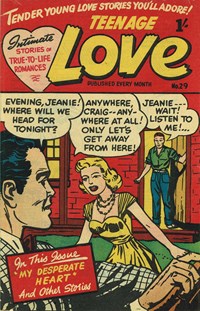 Australian reprint of "My Rebellious Heart".

Here's a puzzle about an unedited "sexy" Australian reprint at a time when the contempory US printing was edited—presumably to comply with the Comics Code Authority.

The story in question is "My Rebellious Heart" from Teenage Love #29 (Barmor Publications), which probably dates from 1954. As with many Australian comics this issue is undated, but some recently auctioned Harvey file copies of earlier issues have dates stamped on the cover.

I noticed the US censorship of this story because I couldn't find the Australian cover on any US comic. That often means Australian original art, but on this occasion the cover is a cut-and-paste of one panel on page 4 of the story "My Rebellious Heart".

The cover in Teenage Love #29 closely matches the source panel, but in the story printed in Harvey's Hi-School Romance 44 (October 1955) the plunging neckline and backless dress have been touched up with black ink.

There are also extensive similar changes throughout the story. The most amusing is in the story's spash panel. There, Jeanie's body has been turned to show her shoulder rather than her chest—which doesn't resolve the implied rape about to occur.

The only noticeable "editing" in the Australian version is on the cover, with yellow rather than fleshtone under Jeanie's arm. Whether deliberate or not, it transforms the backless dress into more respectable attire.

So how did Australia get an unedited version?

Posibly my date estimate for Teenage Love #29 is wrong. If the comic was published after Hi-School Romance #44, Harvey could have shipped an un-touched version for international publication.

However, it's more likely that the Australian reprint is sourced from an earlier pre-code verson that I can't yet identify. Barmor did print stories that were five or more years old.

As a final twist, there is yet another version with a different range of censorship. Original art for the story was sold in 2006 on the Heritage Auctions site. It is reported to be from Hi-School Romance #50, although that is wrong. Several other pages of art listed from issue 50 are actually also stories from issue 44.

In the Heritage Auction version, the impending rape in the splash panel is totally obliterated with a big black heart. If you are going to censor, do it properly!

So I'm left with two questions:

Is there an older US printing, probably from a Harvey comic around 1949/50, that is the real source of the Australian reprint?

Where was the Heritage Auction version printed or was it never used in that form?

If you want to compare all three versions, you can see them at:

(You probably need to register and log in to these other sites to see the full pages.)