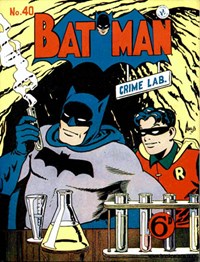 For the best part of 25 years, the odds favoured that almost any of the publications which came from K.G. Murray Publishing Company contained artwork by the man with that bold signature... Hart Amos.

And for those of us who are students of the comics medium, his crisp style, clean accurate drawings were instantly identifiable—with or without that signature. Whether drawing an adventure strip, funny animals or straight magazine illustrations, Hart Amos could be relied upon to produce a thoroughly professional job. 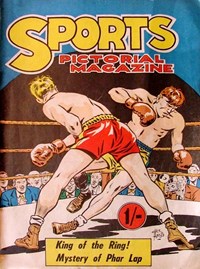 In an industry where we have come to expect the journeyman cartoonist to produce work of varying standards, the consistent high standard of his work ranks him as one of the best comic strip artists to work in Australia.

The Adventures of Congo Bill 1 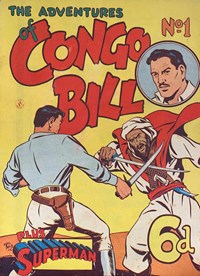 Hartley Vincent Amos was born at Lindfield NSW in 1916, the son of an insurance company manager. He attended Artarmon Public School and then North Sydney Boy's High School before joining the brewing firm of Tooth & Co., Ltd. in 1932.

While his position only encompassed clerical duties in the firm's advertising department, his interest in art lead him to enroll at the East Sydney Technical College in 1933. Here he studied life drawing and oil painting until the end of 1937, while submitting odd cartoons to any publication likely to be interested.

For a brief period Hart decided to break into the freelance art field. When he tired of lugging his portfolio around the disdainful advertising agencies, he would visit his cousin, who was a lift boy at a big shipping company. While Hart would sit on the lift stool, resting his weary feet, his cousin would tell him about his aspirations to become a writer or they would talk about one of their mates: a skinny, unhappy bloke who wanted to become an actor.

Hart's cousin went on to write six best-sellers including The Dambusters, Reach For the Sky and The Great Escape. He was of course, Paul Brickhill. The would-be actor made something of a name for himself in the field—winning an Academy Award. This was the late Peter Finch.