1975. This image is from the published version of Ryan's article in Strips.

He agreed to draw Air Hawk

After leaving the K.G. Murray scene, and after much persuasion, Hart agreed to draw the Sunday Air Hawk page for John Dixon.11John Dixon's outback adventure strip, Air Hawk and the Flying Doctors, debuted as a Sunday newspaper comic strip in Sydney's...

While the early pages were stiff, overworked and somewhat Doone-ish in appearance, the collaboration was a masterstroke on Dixon's part. Amos' work blossomed as he gained confidence... with the result that imparted to the strip a quality that made it one of the most visually pleasing Sunday pages produced by a local artist since the days when Stanley Pitt's Silver Starr was in flight.

Because they have different techniques, it is difficult (and perhaps foolish) to make comparisons, but I am sure that John Dixon would be well-satisfied if he could match Hart's performance on this page. Not knowing that it was handled by Hart Amos, many overseas fans have commented on the fine job that "John Dixon" was doing on the Sunday page... which speaks for itself. 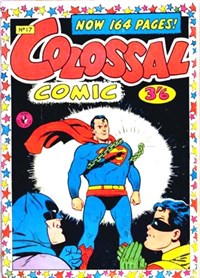 With the Air Hawk page, Hart's penchant for detail was tested to the limit. Not only was he called upon to draw planes, guns, sea crafts, vehicles, etc in far more detail then previously, but he had to pay considerably more attention to the buildings, animals, sand dunes, jungles and varying landscapes that make up the background of this strip. In adding variation to his panel layouts, he had to examine his composition with an eye towards the bottom level of speech balloons, to allow for cropping by some newspapers. But Hart conquered these and other problems to make the Sunday page his own.

When his work had reached a standard acceptable to both Dixon and himself (with great emphasis on the latter), he was allowed to place "H.A." in one of the panels. However, this only lasted until the Sun-Herald (Sydney) decided to print part of their comic section in three colours. The resultant choice of colours and attempted blending of added half-tones almost gave Amos apoplexy! He refused to add his initials to the strip as long as this colour scheme continued. Unfortunately, it is still being used to this day.

Hart's first Air Hawk pages appeared in March 1970 and his last one was published in June 1977. Somewhat indifferent health and the strain of meeting a constant deadline for three decades made Hart decide to retire and catch up on all those things he has been putting aside for years.

One of those things is oil painting. A perfectionist in matters of art, Hart is going through all the agonies of frustration which follow any attempt to adapt to a medium after having spent a lifetime working in an entirely different medium. But given Hart's talent and dedication, there is not the slightest doubt that he will make the transition... and make it successfully. 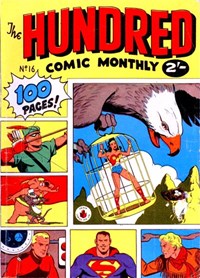 Hart has nothing but praise for John Dixon, both as an employer and a friend... and once he has come to grips with his oil painting problems, he will be looking at some daily strip sequences to assist Dixon [in widening] his deadline buffer. The painting world will be gaining a very warm, talented, literate man with a keen sense of humour. It will be the comic world's loss.

1
John Dixon's outback adventure strip, Air Hawk and the Flying Doctors, debuted as a Sunday newspaper comic strip in Sydney's Sun-Herald. newspaper in 1959, and was gradually picked up major metropolitan newspapers in other Australian states. Dixon was eventually commissioned by the Herald and Weekly Times newspaper group to produce a daily newspaper strip version of Air Hawk in 1963. Dixon continued to write both strips, but hired Mike Tabrett as an assistant, who took over illustrating the Sunday version, while Dixon drew the daily Air Hawk strip. Towards the end of 1969, Tabrett left the strip to become a newspaper staff artist, after which he was replaced by Hart Amos. When Amos retired in 1977, the Sunday version of Air Hawk was passed on to Keith Chatto (1924–1992), who had previously "ghosted" the daily Air Hawk strip for Dixon in 1972.