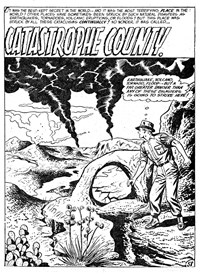 'Catastrophe County' gets a re-reprint

KG Murray's re-use of stories from Five-Score Comic Monthly #10, February 1959 suggests an extraordinary archive must have once existed at the company's headquarters.

The story 'Catastrophe County.' (note the full stop) is a reprint of 'Catastrophe County, U.S.A.' from Strange Adventures #63, December 1955. Such localisation was common at the time: 'Million Pound Ticket', a Mr. District Attorney story in the same issue, was originally 'Million Dollar Ticket'.

While Murray held 'Catastrophe County' for a few years before originally printing it, that gap isn't unusual. What's striking is that, over a decade later, Murray used the same distinctive version—with the full stop in the title—in Mighty Comic #74, December 1969.

In total, at least eight out of fifteen stories in Five-Score #10 turn up within a few months, September to December 1969. None had US printings at the time, so they must all be versions on file in Australia. And notably, the print quality is better in 1969, indicating reuse of the source material, not just a printed copy of Five-Score #10. The original bromides, film or plates for the stories in Five-Score #10 must have been stored together, ready for reuse as a group.

Murray didn't often re-reprint multiple stories from a single earlier issue—more commonly it was a story here and there—although it was the pattern for its Colossal Comics series. That title routinely republished clusters of stories from the company's 1940s and 1950s comics, including some original Australian work (such as Hart Amos) and Quality Comics features (Captain Triumph) early on.

A skim of Murray's comics from late 1969 suggests a couple of months with an increase in the number of old stories not from contemporary US reprints. There's no obvious reason, but perhaps Murray had a temporary supply problem and needed to fill out its new issues. An off-beat possibility is that contract renewals were complex and delayed after Kinney National acquired National Periodical Publications (DC) in 1967 and Warner Bros in 1968 (as DC came to be part of Warner Communications). More likely, it was just a late supply boat.

Seeing these obscure old stories pop up as a group in Murray titles makes me visualise large archive cabinets at their HQ with thousands of stories: some filed under the issue where they were reprinted; the rest kept separate for use in new comics, and stamped or moved after use.

Whatever the archive looked like, the evidence of old stories reprinted suggests it was still in use after Australian Consolidated Press (ACP) completed its takeover of KG Murray in June 1973. And it probably still existed when Murray Publishers switched from on-going series to character-focused one-shots in 1980. Those titles often led with a new story followed by older backups, some of which were not previously published in Australia.

It's possible the archive didn't survive the transfer to the Federal Publishing Company when Murray ceased producing comics at the end of 1982, although some early Federal reprints suggest continued use of a back catalogue. By 1986, though, Federal's focus was solely on contemporary reprints.

Sadly, Murray's incredible resource of black and white golden age art disappeared, probably in the early 1980s. Most likely it was dumped, burned or shredded, but just imagine if it still exists to be rediscovered—especially if it includes that unique original Australian work by Hart Amos and others.