No publisher printed by James Zee 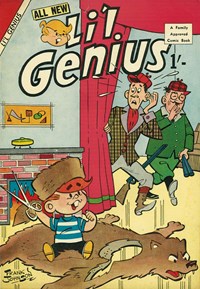 Who published Li'l Genius in Australia?

It's rare for an Australian comic to have no publisher listed. An unnumbered, undated issue of Li'l Genius is one of the few I've seen.

Despite no publisher, the issue has a logo: "A Family Approved Comic". I've seen that on another cover: Great Exploits. I haven't read that issue to know whether it has a publisher listed. It's an oddity in its own right, with obscure material from Decker (1957), an imprint of US publisher Ajax/Farrell.

It is possible the "Family Approved" claim is related to Magazine Management's "Parent Approved" guarantee. The arrangements of that group of companies (Rosnock, Red Circle, Jubilee etc) are unclear and it later rebound some US comics for Australia without local publisher information. It wouldn't surprise me to find it published other anonymous Australian comics.

Cleland's Lil Genius was published 1956—a fact gleaned from a listing in the Victoria Government Gazette on 22 February 1956 that exempted it under subsections (1) and (2) of Section 7 of the Victorian Police Offences (Obscene Publications) Act 1954. That exemption enabled it to be distributed, displayed for sale and sold (in Victoria) without the distributor's name printed on it.

A consequence of the distributor's name being legally required on publications is that "Gordon & Gotch", Australia's dominant distribution company, is listed on the cover of many comics. Some people incorrectly believe it was a publisher.

It is an interesting feature of Australian comics censorship in the 1950s that theoretically obscene literature could be printed, but it was illegal to distribute or sell it. In a 1954 case, Atlas Publications escaped prosecution when it was charged with distributing obscene literature as the distributor was in fact Gordon & Gotch (The Argus, 18 August 1954).

Which brings me back to the anonymous copy of Li'l Genius. While it has no publisher listed, it has extensive distributor information: Sungravure (NSW); Associated Newspapers (Vic); Gordon & Gotch (SA, Qld, WA); Truth (NZ); and Davies Bros./The Mercury (Tas).

Associated Newspapers Ltd (ANL) was a Sydney-focused newspaper chain. Fairfax (Sydney Morning Herald) acquired the company in 1953 and its magazine subsidiary, Sungravure Ltd, was part sold to Odhams Press Ltd (UK) in 1954. Red Circle is part of the Magazine Management group, which is my best guess as publisher for this Li'l Genius issue.

But it might have been published by either — or someone else!