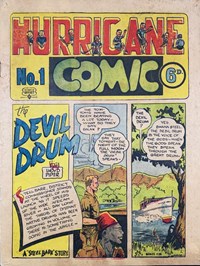 Most Australian comics from the Second World War are undated one-shots, making it challenging to know exactly when they were published. Sometimes it isn't even possible to be sure of the year of publication. 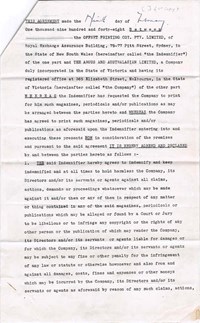 Comics from the Offset Printing Company (OPC) are a classic example. Most suggestions for dates seem to resort to a generic year in the early to mid 1940s. 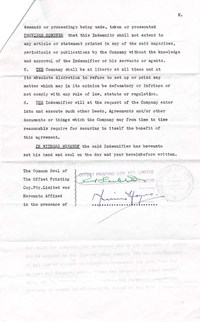 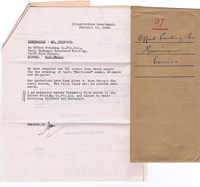 OPC: The Argus and Australiasian memo (1948)

However, documents that surfaced on eBay in late 2011 pinpoint specific issues of Hurricane Comic to just after February 1948.33If the owner of these documents would like acknowlegement or to provide more information, please contact me. I captured some...

The auction included an original agreement between OPC and The Argus and Australasian Limited to print two issues of Hurricane Comic. The documents date between 5 and 13 February 1948. The main substance of the agreement is to indemnifying the printers against any claims should the material "be libellous or to infringe any copyright or the rights of any other person or the publication of which may render the Company… liable for damages…"

The internal cover memo from Argus's "Illustrations Department" notes "We have received two (2) orders from these people for the printing of their "Hurricane" comic, 32-pages and 24-pages… The first issue will be printed next month."44The memo refers to Mr. Thompson of OPC. Advertisements for positions vacant at "O.P.C. Distributors Pty. Ltd." in the Sydney...

Toward the end of its run, Hurricane Comic reduced in size to 24 pages. As it turns out, only two issues specific issues meet the criteria specified in these documents. Issue #16 is 36 pages; #17 is 32 pages; and 18 is 24 pages.

If Hurricane was generally monthly, which seems likely, the first issue was published in October 1946. If the preceding series of one-shots were also released monthly, which is less certain given war-time paper and ink restrictions, then Monsoon (Series C1) was released mid-1944.

1
John Ryan (1979), Panel by Panel, Cassell Australia, Stanmore NSW, passim.
2
Annette Shiell, editor (1998), Bonzer: Australian comics 1900s–1990s, Elgua Media, Redhill South Victoria, p.147ff.
3
If the owner of these documents would like acknowlegement or to provide more information, please contact me. I captured some images out of curiosity, but didn't recognise the letters' significance at the time and don't know who sold or bought the material.
4
The memo refers to Mr. Thompson of OPC. Advertisements for positions vacant at "O.P.C. Distributors Pty. Ltd." in the Sydney Morning Herald during the period 1947-1947 list Mr. Thompson as contact. See for example, 1947 'Advertising', The Sydney Morning Herald (NSW: 1842-1954), 13 May, p. 21, viewed 9 February 2014, nla.gov.au/nla.news-article18025809.