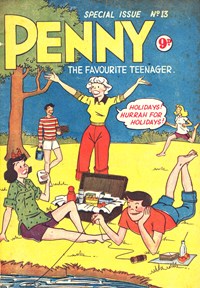 But where is that from?

AusReprints has reached a landmark 30,000 Australian issues, both reprints and original work.

The comic that tipped it over the threshhold was Penny the Favourite Teenager #13 from Young's Merchandising Company. And it's an unexpected comic worth highlighting.

Ths series seems to be based on Avon's six-issue Penny series (1947). From the cover, the characters match, it has the same name, and the masthead is similar. 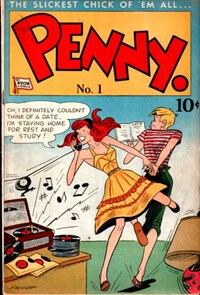 However, the lead character in Avon's series has red/brown hair and there is no obvious source for this cover.

It's a shame I only have one cover image on which to base any conclusions. That's strange in itself -- this "special issue No. 13" is the only one logged on Ausreprints so far.

Is it possible the series didn't start with issue #1, especially since the Avon original only has six issues?

The lack of obvious US material led me to wonder if this might be an original Australian comic inspired by a US series, as occurred with a few other series such as Flynn of the FBI, Sgt. Pat of the Radio Patrol and Brenda Starr. It does use an Australian spelling of 'favourite' on the cover.

But this title isn't listed in any of the usual reference books or websites and, as it turns out, the answer is probably more prosaic.

Penny is a newspaper strip, created by Harry Haenigsen. That strip is also the basis of the Avon series.

While the strip has not hit my radar before, it was broadly distributed by New York's Herald-Tribune Syndicate from 1943 to 1970.11See the Don Markstein's Toonopedia and Lambiek....   Australian newspapers ran the strip from as early as 1945 to at least 1955.22See Trove....

So this comic most likely follows a long-standing Australian tradition of reprinting weekday or Sunday newspaper strips with an original Australian cover. Youngs also did other series from newspaper strips, Bugs Bunny and Mandrake the Magician.

As there is plenty of Penny newspaper material to make up 13 or more issues, the Avon stories are probably not even reprinted in this series.

With new titles like this still turning up and just one out of 13 issues of this series confirmed to date, there is clearly much more to be uncovered about Australian Comics. Will we get to 40,000 issues?