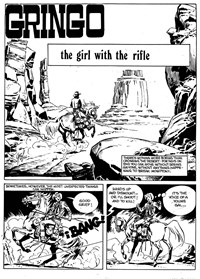 Gringo was Carlos Giménez's first adult-oriented work after joining Selecciones Ilustradas and he considers that he was not particularly skilled at the time. He has stated that it must have been just his obvious enthusiam that made Gringo a success.11See www.carlosgimenez.com.... 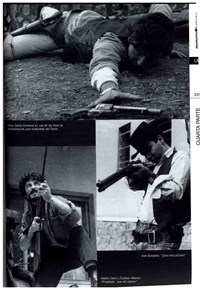 Despite his pessimistic view, the atmospheric imagery, strong sense of anatomy, detailed fine line work and hints of humour show his amazing potential and ability, which created fans over many years. The series was sold to many countries and SI Agency head, Josep Toutain, was reportedly delighted with it.

When Giménez moved on in 1967, it is possible the series survived due to Toutain's support and the continued interest from many countries whre it was syndicated. It could be that the decision to proceed with more episodes led to a push for new international markets and the approach to KG Murray, which began publishing the stories in Australia at this time. 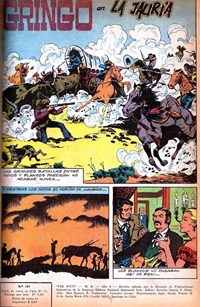 Unfortunately, there is little information on the order or attribution of later stories. There is some indication of contributions from writers Miguel González Casquel (1926-1990)22See www.carlosgimenez.com and www.tebeosfera.com. Miguel González Casquel was born in Spain in 1926. He also worked on a...   and Carlos Echevarria,33See www.tebeosfera.com. Despite working on a number of internationally recognised stories, there is little biographical information on Carlos Echevarria....   and from artists Domingo Alvarez (b. 1942)44www.tebeosfera.com. Domingo Alvarez Gómez was born in Spain in 1942. He predominantly did non-comics magazine work from about 1965...   and Suso Rego (1941-2005).55Jesus de la Peña Santiago Rego was born 2 June 1941 in Ribadeo and received his nickname Suso as a...   A claim that Italian artist Renato Polese (b.1924) also worked on the series seems unlikely.66His biographical information makes this seem unlikely, but it is reported in relation to printings in Totem (France). Renato...

Of the subsequent Gringo artists, Suso produced the largest number of stories and achieved greatesinternational recognition. Suso's style has been compared to Steranko, with a distictive 1970s feel including psychedelic images and skilful use of strong black and white shapes. 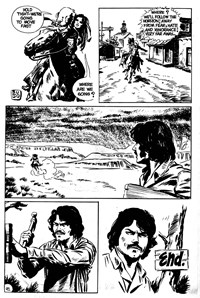 Reflecting on that period of his life, Suso states,

"In my twenties I decided to become a comic book artist and, with the help of my army friend Estaban Maroto, joined a studio on Infantis Street in Madrid where I worked with Carlos Giménez and Adolfo Usero... Then I joined the La Floresta Group in Barcelona, and worked on 5 x Infinite with Maroto, Usero, Luis Garcia and Ramon Torrents, before taking over my own western series Gringo, which I worked on until I had the opportunity to draw horror stories for Skywald" (in 1973).77Page 57, Alan Hewetson, "Skywald!: The Complete Illustrated History of the Horror-Mood" (Headpress: 2005). Suso worked for Skywald between 1973...

Suso's tenure possibly didn't immediately follow Giménez's run, with the likelihood another artist providing some intervening stories. Suso worked on the series from at least 1969, with his earliest signed work dated that year and a number of episodes published late that year.

His final work on the series may be the episode "A Bruxa" ("The Witch"), which includes an odd sequence on the last page: an unidentified figure watches Syd Bicking ride off and then nails a wooden notice reading "the end" to a tree. The figure looks like Suso88There was a photo of Suso in Skywald editorial pages in 1973, reprinted on page 57 of Skywald!: The Complete...   and the sequence looks suspiciously like his farewell to the series. It may also be the series final episode, although it is possible that other artists continued on after Suso, as the ordering of their stories is uncertain.

1
See www.carlosgimenez.com.
2
See www.carlosgimenez.com and www.tebeosfera.com. Miguel González Casquel was born in Spain in 1926. He also worked on a Spanish version of Doc Savage (Editorial Rollán, Spain), and on Mendoza Colt (Editorial Rollán, Spain) with Santiago Martín Salvador, the artist on Dick Turpin, which was published by KG Murray in Australia.
3
See www.tebeosfera.com. Despite working on a number of internationally recognised stories, there is little biographical information on Carlos Echevarria. KG Murray also printed Echevarria's Jeff Blake, el Hombre de Pinkerton (with artist Suso Rego) and Geminis (with Alfonso Font), while Gredown published his series Mestizo (with Luis Bermejo) in Australia.
4
www.tebeosfera.com. Domingo Alvarez Gómez was born in Spain in 1942. He predominantly did non-comics magazine work from about 1965 with a period at SI, 1971-1975, including work for US Skywald. In recent years he has focused on painting and exhibiting his work.
5
Jesus de la Peña Santiago Rego was born 2 June 1941 in Ribadeo and received his nickname Suso as a child. Through the army, he met Estiban Maroto (with whom he worked on "5 x Infinity") and joined the SI agency. Other work published by KG Murray includes "Hombre de Pinkerton" ("Pinkerton Man" with Carlos Echevarría), which he worked on 1976-1980. In 1967 he helped form the La Floresta Group in Barcelona (with Adolfo Usero , Esteban Maroto , Luis García and Carlos Giménez). His work has been published in UK Fleetway (Steel Claw) and US Skywald and Warren magazines. From the 1980s, he devoted himself to teaching and photography, and died 5 February 2005. On 4 February 2006, a street was named after him in the San Lázaro district of his home town Ribadeo. For further information, see lambiek.net.
6
His biographical information makes this seem unlikely, but it is reported in relation to printings in Totem (France). Renato Polese was born in Rome in 1924. While his earliest comics were published in Italy, from 1954 he went to England and worked for Fleetway, Hulton and IPC before returning to Italy. For more information, see www.lambiek.net.
7
Page 57, Alan Hewetson, "Skywald!: The Complete Illustrated History of the Horror-Mood" (Headpress: 2005). Suso worked for Skywald between 1973 and 1975, and also did two stories for Warren's Eerie, issues 43 and 45.
8
There was a photo of Suso in Skywald editorial pages in 1973, reprinted on page 57 of Skywald!: The Complete Illustrated History of the Horror-Mood by Alan Hewetson.