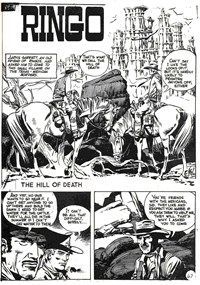 Ringo and the contemporaneous Johnny Galaxy and the Space Patrol were Murray's first foray into comics based on the output of the Spanish Selecciones Ilustradas agency. 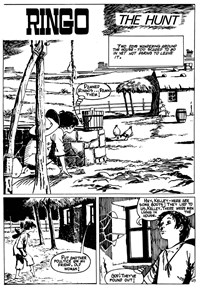 It isn't hard to imagine why the KG Murray publishing company would have been tempted by the Gringo series.

Gringo was a proven seller that had been published across the globe in multiple languages. It came with a sizeable back catalogue that Murray immediately took advantage of by printing feature stories cover-to-cover. 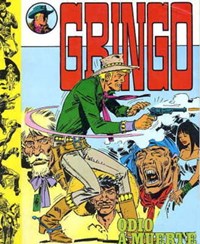 And the series was perfectly styled to piggy-back on the popularity of "spaghetti westerns" in the latter half of the 1960s.

The spaghetti western trend was exemplified and largely created by Sergio Leone's "Man With No Name" trilogy starring Clint Eastwood: A Fistful of Dollars (1964), For a Few Dollars More (1965) and The Good, the Bad and the Ugly (1966). Taking into account delayed film releases in Australia, these films would have been current when Murray prepared Ringo 1 in 1967.11Some recent sales of original Australian Daybill Movie posters suggest A Fistful of Dollars was released circa 1966; For a... 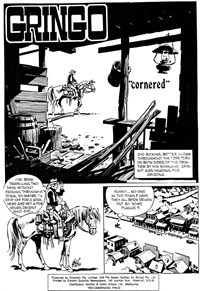 While KG Murray had existing sources of western comics, the US reprints lacked the distinctive flavour of the new sub-genre,22Released around the same time as Ringo 1, KG Murray's Bumper Western Comic 32 includes The Durango Kid, Tim...   which focused not on frontier explorers and native American Indians, but on morally ambiguous anti-heroes, the Mexican revolution, Mexican bandits, and the border area between the US and Mexico.33See, for example, "Spaghetti Western" at Wikipedia....

The spaghetti western films were produced in Italian, but they were mostly shot in Spain and the Spanish SI Artists captured the mood in a way contemporary US comics couldn't.

At the same time, though, KG Murray's caution is also conspicuous.

1
Some recent sales of original Australian Daybill Movie posters suggest A Fistful of Dollars was released circa 1966; For a Few Dollars More released circa 1967 and The Good, the Bad and the Ugly also released circa 1967.
2
Released around the same time as Ringo 1, KG Murray's Bumper Western Comic 32 includes The Durango Kid, Tim Holt/Red Mask, Dan Brand and Tipi, The Lemonade Kid, White Indian, The Ghost Rider, Bobby Benson's B-Bar-B Riders and The Presto Kid.
3
See, for example, "Spaghetti Western" at Wikipedia.