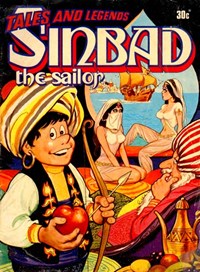 All three lived in South America in the late 1940s, a period when post-war depression and economic isolation under Francisco Franco's regime led to mass emigration from Spain. 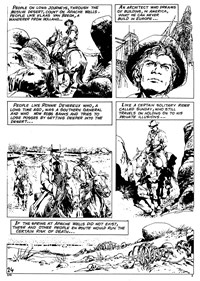 After Spain's international ostracism ended in the mid-1950s, Ramon and Chiqui returned from Argentina, probably around 1958. The brothers worked in Madrid before moving to Barcelona and commencing work with Selecciones Ilustradas.

At that time, Víctor was still based in Chile, where he had moved in 1945 to work for Editorial Zig Zag, one of the oldest children's publishers in Latin America and later publisher of SI works such as Sunday. Víctor established his own advertising agency and, in 1957, was instrumental in reviving the magazine El Péneca.

For El Péneca he created a western comic strip called Poney Durango. He sent this to his brothers in Spain to test the market there,22According to es.wikipedia.org, this occurred in 1960, although other reports indicate Fuente returned to Spain in 1959. It is...   and the work was published through the effort of Ramon, who is at times credited with the series and may have assisted. 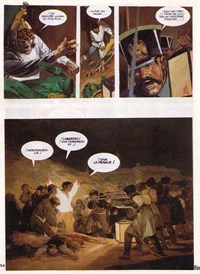 Víctor subsequently returned to Spain around 1960, citing a desire to reconnect with his country.

According to some reports, Poney Durango captured the attention of Josep Toutain (1932-1997)33While Josep Toutain began as an artist in the late 1940s, he focused most of his career on promoting Spanish...   at Selecciones Ilustradas and Víctor was also brought into the agency. Regardless, it seems likely that this talented artist would have soon joined his brothers at the agency.

Toutain had tapped into foreign markets with a voracious appetite for comic art and had became a magnet for young Spaniards with a knack for drawing and a hunger for work.

1
Chiqui de la Fuente was born in Spain in 1933, moving to Argentina with his brother Ramon in the late 1940s. After returning to Spain he did anonymous work for UK Fleetway and DC Thompson comics with Selecciones Ilustradas, before doing his own humorous comics. He continued to do syndicated work for SI Artists, including Vance Flanagan, Lonely Rock, Super Tres and Pampa, but gained international recognition in 1975 for his adaptation of "del Barón de la Castaña" as "The Adventures of Baron Münchhausen" (Amaika, Spain).
2
According to es.wikipedia.org, this occurred in 1960, although other reports indicate Fuente returned to Spain in 1959. It is possible part of this series is in Cowboy Extra Navidad (Spain, 1972).
3
While Josep Toutain began as an artist in the late 1940s, he focused most of his career on promoting Spanish artists throughout the world, especially through Selecciones Ilustradas. In 1973, he established Toutain-Editor, a dominant force in the Spanish comics industry throughout the 1980s, until the decline in the Spanish market of the 1990s. See lambiek.net.