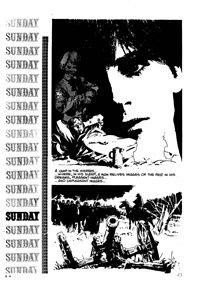 The timing of Toutain's first major syndication push coincides almost exactly with the Australian publication of Johnny Galaxia and Ringo, the first SI Artists properties printed by KG Murray in 1967.

Downfall of a Gunslinger 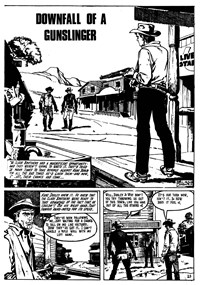 However, publication lead times mean that Toutain's new syndication works (including Sunday) would generally not have have been available at the time Murray signed its first contract for the stories and begun publishing Ringo. 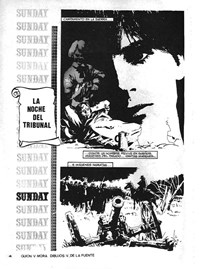 Within the first dozen issues, though, an increasing number of stories from the post-1967 period began to appear—certainly well before Sunday's first appearance in issue 24 five years later.

One possibility is that KG Murray held off on Sunday, proceeding cautiously with its own experiment with Spanish material. Murray may have been unwilling to buy a series sight-unseen or may have wanted a stockpile of stories before beginning publication. Notably, the SI syndication series were only produced at a rate of six to nine episodes each year. 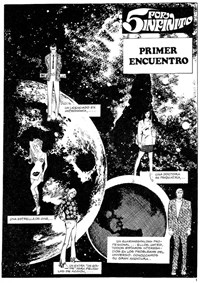 5 x Infinito and Delta 99 were not published by KG Murray, although they were later published in Australia by Gredown. At least 5 x Infinito could have been available during the first wave of SI material in Australia.

It may be that Murray considered that the genre was not marketable and not a good investment. All Star Adventure Comic (reprinting DC's Strange Adventures) was the closest Murray had to a science fiction comic around 1970 and Johnny Galaxia survived only four issues.