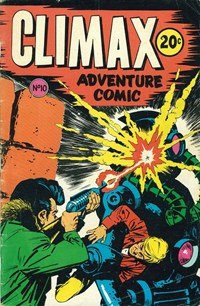 (KG Murray, Australia: 1971). Johnny Galaxy appeared in several issues, but this was his only starring role on the cover of this series.

By the time KG Murray published Johnny Galaxia in Australia in 1967, nearly a decade had passed since the feature's creation and it was about to experience a new wave of international syndication. 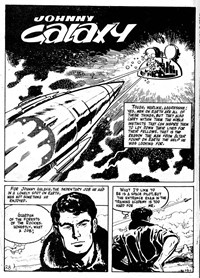 by Jose Beá, Super Giant 2, 1973 (KG Murray, Australia). Marked with the code JG-1, this might be the first episode of Johnny Galaxia, jointly authored by Jose Beá and Blay Navarro.

It is tempting to guess that Murray sourced Johnny Galaxia via existing contacts in the UK, or obtained that same English-language version from a common distributor. During the 1950s, Atlas redistributed and republished Murray's DC reprints in the UK. Atlas also published Space Ace, but its text differs dramatically at times to other versions of Johnny Galaxia, even to the point of changing the plot.

The Origin of Space Ace 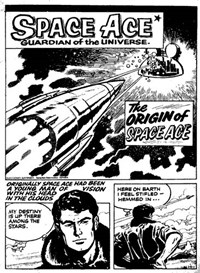 • Atlas UK: Originally Space Ace had been a young man of vision with his head in the clouds. “My destiny is up there among the stars. Here on Earth I feel stifled—hemmed in…”

• KG Murray: For Johnny Galaxia, the sedentary job he had in a lonely spot on earth, was not something he enjoyed. “Guardian of the forests of the Rockies, honestly, what a job. What I’d like to be is a space pilot, but the entrance exam in the training academy is too hard for me.” 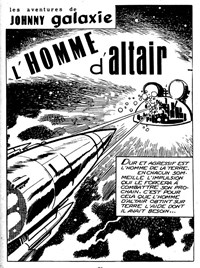 Significantly, in the Atlas series, Johnny's regular companion is called Kook, rather than Truck.

The version of Johnny Galaxia that L. Miller & Son published in Marvelman comics (1962 to 1963) provides another possible source. During the 1940s and 1950s, Miller published UK editions of US comics, notably from Fawcett (Captain Marvel and Hopalong Cassidy) but also Ajax-Farrell, Atlas, Charlton, Fox, Lev Gleason, Magazine Enterprises and Novelty. An intermediary distribution company could have provided these to both the UK and Australia.55Kevin Patrick speculates (at Comics Down Under) that a company such as Transworld Features supplied Australian publishers with TimelyAtlas/Marvel...

However, a US connection seems unlikely as Johnny Galaxia wasn't published there, although Spanish printings found their way across the border. There are also text differences between the Miller version and Murray's printings, although direct comparison of artwork is still needed to be certain.66"The Man Who Wanted to Steal a World" from Climax Adventure Comic 10 November 1971 has been reported as...

It seems likely that the material was provided virtually directly from Selecciones Ilustradas as part of a new syndication push.

1
Space Ace 14 September 1961.
2
Tenax 111 3e Trimestre 1980.
3
Super Giant 2 May 1973.
4
Which translates literally like: "In a lonely place of the earth, Johnny Galaxy does his regular work, work that has no attraction for him... 'Forest Ranger in the Rocky Mountains! I wonder who could love a job like this? A space pilot! I would! Yet the entrance exam at the academy is difficult!'"
5
Kevin Patrick speculates (at Comics Down Under) that a company such as Transworld Features supplied Australian publishers with TimelyAtlas/Marvel and other material. An company such has this could have supplied the diverse non-DC (and even DC) material published in Murray's line, including the diverse stories published in Climax and Super Giant, which printed Johnny Galaxy.
6
"The Man Who Wanted to Steal a World" from Climax Adventure Comic 10 November 1971 has been reported as "The Man Who Tried to Steal a World" in Young Marvelman 370 February 1963. I'd welcome art scans of relevant stories to make a true comparison.