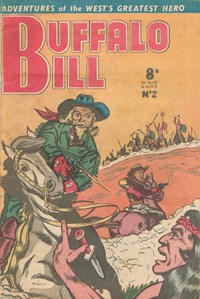 From about 1950 to 1966, Horwitz Publications was a large publisher of war, western and crime comics, including popular titles such as Navy Combat, Fast Gun, Wyatt Earp and Buffalo Bill.

Horwitz predominantly reprinted US comics, sourced mainly from Timely/Atlas/Marvel, but with other US publishers and newspaper strip reprints. In the late 1950s, it created some local comics, notably adaptations of its Carter Brown novels11Horwitz's Carter Brown novels were by far its most popular product. Originally published under the name Peter Carter-Brown in 1951,...   and The Phantom Commando, created by John Dixon but passed to Maurice Bramley (b 1910)22See also Daniel McKeown archived article on Bramley at Pandora, originally from Comics Australia....   who drew it until 1956. 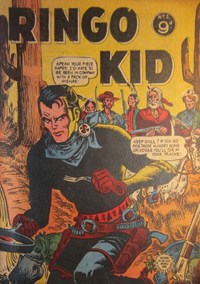 At its peak, Horwitz reportedly released up to 48 comics and 24 fiction titles each month, with print-runs of up to 250,000 copies.33See The mysterious case of Carter Brown: or, who really killed the Australian author? by Toni Johnson-Woods, Australian Literary...   Many of Horwitz's comics had covers by Bramley, whose detailed and realistic drawing gave the publisher's titles a distinctive style. Bramley also contributed some filler stories.

Another distinctive feature of Horwitz' comics is the company's "code" seal. Horwitz issued a Code of Publishing Ethics to all its editors, artists and authors in March 1954. The code particularly focused on comics and banned sex, poor grammar, blasphemy and profanity of any type.44Page 209, John Ryan Panel by Panel (Australia: Cassell Australia)....

Horwitz Publications was founded in Sydney in 1920, when Israel and Ruth Horwitz produced the Sporting Weekly newspaper. The company is most assocated with Stanley Horwitz, who took over publishing operations in 1956. 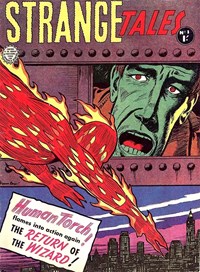 Horwitz rapidly expanded into books, trade journals, community newspapers and magazines, and is fondly remembered for its numerous pulp novels. By 1960, after the arrival of television, the market for pulp, pocket size paperbacks collapsed and Horwitz moved into higher quality paperbacks and educational books.55Craig Munro and Robyn Sheahan-Bright report in Paper empires: a history of the book in Australia 1946-2005 (Univ. of Queensland...

The earliest Horwitz comics were produced under the imprints of Associated General Publications Pty. Ltd and Transport Publishing Co., before converting to the more recognised Horwitz Publications Inc. Pty. Ltd. The company ceased publishing comics in 1965 or 1966, soon after establishing a line of Marvel super-hero reprints. Reprints of a number of Horwitz titles were produced by Page Publications in the 1970s.

The Horwitz Group, still with members of the Horwitz family, continues to operate with a magazine division producing material for the adult, sporting, entertainment, audio visual and children’s market.

1
Horwitz's Carter Brown novels were by far its most popular product. Originally published under the name Peter Carter-Brown in 1951, the books were written by Alan G. Yates. The novels would continue to be published until 1983, in formats ranging from digets novelettes to standrd paperbacks. In the mid 1950s, Horwitz was publishing up to 24 Carter Brown titles a year. Sales volumes were boosted with an agreement for US publication by New American Library from 1967, expanding the typical Australian print run of 70,000 to 80,000 copies up to 300,000 copies each month. See page 51 of Craig Munro & Robyn Sheahan-Bright, Paper empires: a history of the book in Australia 1946-2005 (Univ. of Queensland Press, 2006).
2
See also Daniel McKeown archived article on Bramley at Pandora, originally from Comics Australia.
3
See The mysterious case of Carter Brown: or, who really killed the Australian author? by Toni Johnson-Woods, Australian Literary Studies, Oct, 2004.
4
Page 209, John Ryan Panel by Panel (Australia: Cassell Australia).
5
Craig Munro and Robyn Sheahan-Bright report in Paper empires: a history of the book in Australia 1946-2005 (Univ. of Queensland Press, 2006) that Horwitz acquired Owen Martin/Martin Education in 1964 to distribute Prentice Hall's US educational titles, and purchased the Grahame Book Company in 1968. It seems likely the relationship with Grahame started earlier as some 1960s issues of Horwitz comics include advertising for The Grahame Book Company at 39 Martin Place, Sydney—the same address as Horwitz, at the time. Grahame existed as early as 1946 and it co-published with Horwitz in 1965 (Fourteen Journeys Over the Blue Mountains of New South Wales 1813-1841, ed. George Mackaness, Horwitz Publications Inc. Pty Ltd. & The Grahame Book Company Pty Ltd, 1965.)