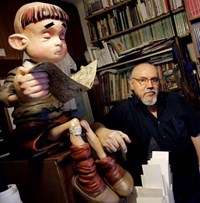 Carlos Giménez was born in Madrid. His father died soon after his birth and he spent his childhood in an orphanage. Aged 17, he showed his artwork to Manuel López Blanco and was employed as his assistant at Ibergraf.

His stories became increasingly autobiographical and historical. Paracuellos (1975) explores life in orphanages and Los profesionales (1982) recounts life at the Selecciones Ilustradas studio. He received a career award from "Salon del comic de Barcelona" in 2005. In 2012, he completed "Pepe", a biography of his colleague José González.

Carlos' birth date is reported on www.lambiek.net as 6 March 1941. His own website reports 16 March.