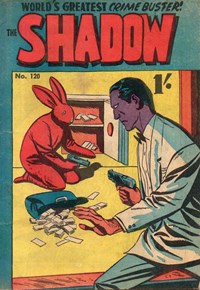 Peter Chapman was born in North Sydney and studied at the East Sydney National Art School, where he studied under William Dobell, Dadswell, Harvey Dundas and Townsend. Chapman was employed by Frank Johnson Publications and also introduced Phil Belbin to Johnson.

Chapman produced numerous titles for Frank Johnson and also worked for KG Murray before freelancing with Frew Publications, drawing 'The Shadow', a creation by Jeff Wilkinson.

When comics declined, Chapman became a designer at the John Sands Company, working on greeting cards, games and calendars. In 1973, he built a house and studio in the bush, where he continued to work as a freelancer and to teach.