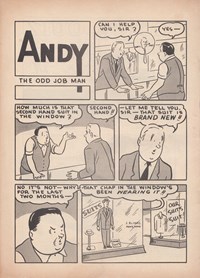 Widocks moved to Sydney from Perth as a child. From age 12, he contributed illustrations to the Sunbeams children's pages in The Sun (for example, 'Rambler's Notebook', The Sun 13/8/44) and at 14 he drew a strip for the North Sydney Police Boys' Club (Sunday Times 7/7/46).

From the late 1940s until 1955, Widocks contributed a number of one-page humour comics to Meteor and KG Murray publications. He also contributed cartoons to Humour (New Century Press).

Widocks worked as a commercial artist and advertising/marketing consultant.

Widocks' father was Edward James Widocks, who died in Sydney on 29 July 1966. His mother was born Bessie Jordan. Widocks possibly worked for Australian Photographic Agency in the sixties. Widocks studied art at technical college at the same time as T. W. Wrightson.