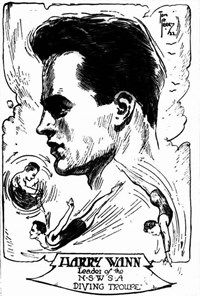 Wann began diving in 1914 aged 16, became a champion diver and led a champion diving troop from 1924 to 1932. He trained and famously beat Olympic diver Dick Eve, was a friend of Australian boxer Les Darcy, and retained sporting connections throughout his life—including having his hand bitten by a shark in a fishing incident in 1951.

Wann studied art at the Julian Ashton School of drawing. It is possible his earliest published work was in Aussie the Cheerful Monthly in 1920. From that time he provided illustrations, cartoons and caricatures for publications including Sydney Sportsman, Truth, Daily Pictorial, Reveille (journal of the Returned and Services League of Australia NSW Branch), The Sun and Wireless Weekly. He was on staff at Associated Newspapers from 1928.

In the 1930s, he did a caricature of Jimmy Bancks (creator of 'Ginger Meggs'). The pair featured together at benefit for the Anti-Tuberculosis Association on 26 October 1935, signing autographs and drawing quick sketches (http://nla.gov.au/nla.news-article231181348).

From the late 1930s, he illustrated many text stories for World's News and in the 1940s he illustrated several children's books—Loosikins, Gurriki, and Amazing Australia. In 1935, he was shortlisted for the Archibald Prize for the painting 'Miss Spicer'.

In 1952, he traveled to Adelaide to exhibit his oil paintings at the Curzon Gallery. While painting in a rural area near Adelaide, he was hit and killed by a drunk driver.