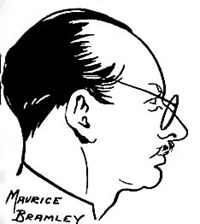 Maurice Bramley was born in New Plymouth, New Zealand and migrated to Sydney in the mid-1920s.

From the 1930s, Bramley worked as a commercial artist The World's News and Woman and Woman's Budget (Sun/Associated Newspapers), with many covers and illustrations for the company through into the 1950s. During the second world war, he worked on recruitment posters for the Department of National Service. His 1943 poster 'Join Us in a Victory Job' was used on a postage stamp in 1991.

In the mid-1940s, he began a long association with AGP/Transport/Horwitz painting covers for pulp novels and later covers and filler stories for its reprints of US comics. He later provided full stories in issues of Navy Action (1960) and The Phantom Commando (1960).

After Horwitz stopped publishing comics, Bramley continued drawing covers, fillers and some entire stories for Yaffa/Page, including Frogman (~1967) and The Fast Gun (~1970).

Kevin Patrick reports that Bramley's birth date is (incorrectly) listed as 1910 in his byline for the 'Join Us in a Victory Job' poster.