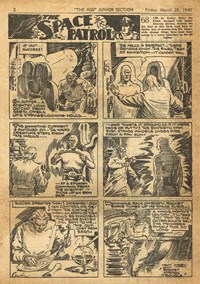 Reg Hicks was born in Gillingham, Kent in England in 1905. His family migrated to Australia in 1911. He was a student of Melbourne’s National Gallery School and a member of the Victorian Artists’ Society, He worked as a freelance cartoonist for local magazines, before adapting the science-fiction serial, Out of the Silence, as a comic strip for Melbourne’s Argus newspaper between August and December 1934.

After serving briefly with Naval Intelligence in 1940, Hicks joined Associated Newspapers, where he created the domestic strip Family Man for the daily Sun and strip Adventures of Tightrope Tim for the Sunday Sun (~1941-1949).

He created Kid Koala for the Sydney Sun, which was published in four comics (Associated Newspapers, Wollumbin and Fred Ritter).

Hicks left Associated Newspapers in 1958, but remained active as a freelance writer and illustrator. As 'REG' he created the comic feature Ron Christy for Horwitz, which featured in four issues of its own title and as a backup in several of Horwitz's war comics (1958-1962). He also illustrated a number of stories and one-page information features for Horwitz.

Hicks wrote stories for children’s annuals, such as Girls’ Own Book and contributed illustrations to the Flying Doctor book series.

He joined the Adelaide studio of ABC-TV as a graphic designer in 1963 and stayed until his retirement in 1977.

Nat Karmichael reports "Graeme Cliffe... has accessed some old electoral rolls... and found that Reg Hicks was a voter in 1931. As the voting age was 21 years at the time, it seems unlikely he was born in 1915." Matt Cole reports "The inaccuracy with Hicks‘ age is from when he sought employment with ABC in SA as they wouldn’t hire anyone over fifty, so he dropped ten years off his age."

Signatures reported to be Hicks seem to read 'Renn' - but this is not Ronald Percy Renn (b. 1912) (https://renncartoons.blogspot.com/).