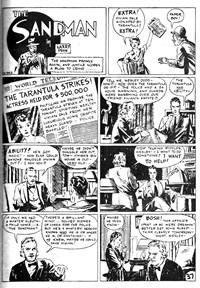 Fox is best known for creating numerous characters for DC Comics, including co-creating the Flash, Hawkman, Doctor Fate and the original Sandman. He created the Justice Society of America and Justice League of America. He introduced the concept of the Multiverse in the 1961 story 'Flash of Two Worlds!'

He was also a science fiction author and wrote many novels and short stories. During the mid 1940s and into the 1950s Fox wrote for Weird Tales, Planet Stories, Amazing Stories, Marvel Science Stories and a diverse range of pulp magazines. While writing for DC, Fox wrote under a variety of male and female pseudonyms for publishers such as Ace, Gold Medal and Signet Books.

Fox stopped working for DC in 1968 when the company refused to give health insurance and other benefits to its older creators. He began to write novels full time.