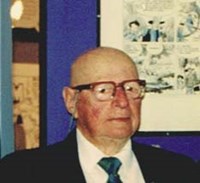 Les Dixon was born in Sydney and adopted at six months of age. He spent his childhood in inner Sydney before his family relocated to regional NSW. In 1924 he he signed up for a correspondence course promoted by the Australian painter Harry J. Weston and returned to Sydney in 1929, working in manual jobs while continuing to take art lessons by correspondence.

He was forced by a serious traffic accident to stop work at the age of 28, which opened up the chance to study life drawing at the Catholic Guild, Sydney. He became a freelance artist, selling his first drawing to The Bulletin in 1939. He joined the staff of Smith's Weekly in 1942, where he remained until 1949, just before the paper folded the following year.

He became Sydney art editor for The Courier-Mail until February 1957, when he took over the Bluey and Curley newspaper strip. He continued to produce the strip for eighteen years, until it ended on 26 July 1975.

Dixon also created the comic strips, Little Trump and Phill Dill. When Les retired at 65, he continued to supply strips “for the seniors” (Retirement Village and Sandy Lakes), which appeared in the Wyong Shire Advocate and the free national monthly newspaper, The Australian Senior Citizen.

Dixon was made a life member of the Australian Black and White Artists' Club in 1991 and was awarded a Silver Stanley in 1994 for his contribution to Australian cartooning.