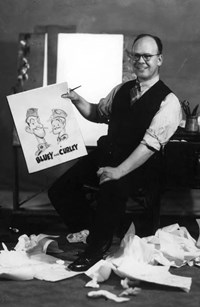 While born in Portsmouth, Alex Gurney's mother was Australian and the family settled in Hobart Tasmania. Gurney was educated at Macquarie Street State School and was drawing caricatures of his classmates before he left school aged 13. While training as electrical apprentice at Hobart Technical College, he was drawn to art classes by Lucien Dechaineux (1869–1957).

By 1918, Gurney was submitting work to The Bulletin, Melbourne Punch and Smith's Weekly. In 1926 his book of charactures of notable Tasmanians (Tasmanians Today) brought him to the attention of mainland newspapers. From that time, he worked for numerous papers—in Melbourne for the Morning Post, in Sydney with the Sunday Times, for Labor paper The World, The Daily Guardian, The Sydney Mail, and then in Adelaide with The News in 1931. During this time he created 'Stiffy and Mo' (based on the radio comedy) for Beckett's Budget and 'The Daggs' for the Sunday Times. In 1932, he created 'Fred, the Football Fan' for the Adelaide Mail and then 'Ben Bowyang' for the Melbourne Herald in 1933, before becoming that paper's feature cartoonist.

In 1939 he created 'Bluey and Curley', his most famous strip about two larrikin soldiers. It appeared initially in the Picture-News magazine before being picked up b The Sun News-Pictorial in 1940 and syndication throughout Australia, New Zealand and Canada. During the war, Gurney was an accredited war correspondent and his strips drew on his experiences in army camps in Australia and New Guinea. While the strip declined in popularity after Bluey and Curley returned to civilian life, after Gurney's sudden death it was continued by Norman Rice and then Les Dixon until 1975.