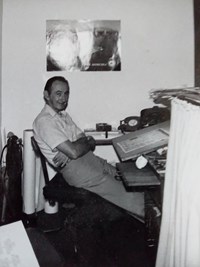 Brand was born in Paddington, Sydney. He was educated at Sydney Technical College Ultimo and in 1943 he started its Lower Arts Course.

During this period, Brand did work-experience days at film artist studios in Sydney to gain practical experience. His work was recognised for its merit and, in February 1945, he secured a two-year scholarship in the Advanced Art Course at Sydney Technical College. He graduated 1947 and commenced work as an artist with Fairfax Publishing.

From 1948 until 1960, Brand contributed to the expanding market for comics and pulp stories featuring detective noir, westerns and science fiction.

He helped launch the comic publishing program for Calvert with his Ace Gremlin one-shot comic in late 1949 or 1950. Over the next year, he continued to draw the feature in Calvert's Kayo Comics and 'Trig' Matson. Around 1951, he provided several covers for AGP/Transport's comic Crime-Busters.

As the market collapsed for comics and pulp magazines at the end of the fifties, Brand moved into product logo and package design, working for Allpacks Pty Ltd. at Five Dock, Sydney.

Brand later closed his Broadway office and worked exclusively from home. He gradually wound down his output and officially retired in 2008, after 60 years at the art board. He did some further commissioned western artwork for his son and special requests for friends. He continued to draw and paint up until early August 2017.

In the winter of 2017, he contracted pneumonia and was not able to recover. He passed away at Royal North Shore Hospital two months short of his 90th birthday. His family describes him as a shy and humble man, who loved his work and never saw it as a job. His son Peter reports, "He is greatly missed, but fortunately left a large body of art-work that his family continue to enjoy."

In 1951, Brand married Margaret Ann Burgess and purchased a home in Gladesville, where they lived for the rest of his life. The couple had a daughter Julie and son Peter. Biographical information generously supplied by Brand's son Peter.