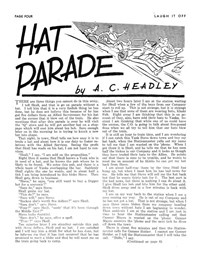 Cousin is reported to have been a camoufleur with the RAAF (Smith's Weekly, 29 December 1945).

He illustrated at least one story for The Australian Women's Weekly (1938), then regularly for The Australian Woman's Mirror (1939-1945). He provided cartoons to the Bulletin during the war (~1938-1944) and a collection of his Bulletin cartoons Laugh it off! was published in 1944, including text stories by A. C. Headley. One of his cartoons featured in The Bulletin's 70th anniversary edition on 1 February 1950 (v71#3651).

In 1941, Cousin and fellow Johnson artists Newton S. Hedstrom received third and second prize (respectively) in the New south Wales Travelling Art Scholarship for landscape painting (The Evening News, 8 April 1941). The following year, he achieved second place (The Sydney Morning Herald, 16 April 1942). He was a finalist for the Wynne Prize in 1940, 1942, 1943 and 1968, and the Archibald Prize in 1940 and 1944.

Cousin was associated with Joe Holloway's Sketch Club, a group for student artists based in Haymarket, Sydney. It's first annual showing was in November 1939 and continued until at least 1947. Cousin exhibited in 1945 (at least).

After having some cartoons published in Smith's Weekly around 1940, during 1945-1946 he worked regularly for the magazine. He possibly then worked in London contributing to Punch and Lilliput.

In the 1970s and 1980s, Bruce Cousin illustrated a number of youth books, including a series for teenagers by Hilarie Lindsay (1976-1977) and a book of children's poetry, That's Silly! (Sydney: Lansdowne, 1980). The Mitchel Library includes a cartoon for the Bulletin signed 'Cousin', dated 28 April 1981.

It is possible Cousin grew up in Queensland, given some interest in his Sydney activities by the Rockhampton Morning Bulletin which refers to a 'Master Bruce Cousin' in 1924 (http://nla.gov.au/nla.news-article54276173). However, there is also regular reference to 'Bruce Cousins', which seems to be a different person. There was an obituary for Bruce McFarlane Cousin in the Sydney Morning Herald 30 June 1987.