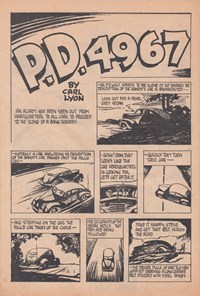 Lyon studied art at Ultimo Technical College and became a theatrical scenery painter with Greater Union Theatres, before moving to Queensland in 1929 to work as a cane-cutter during the depression.

His career as a commercial artist continued when he returned to Sydney In 1931. He freelanced for Smith's Weekly, The Bulletin, Guardian, Sydney Mail, Australian Women's Weekly, Australian Woman's Mirror and Humour (until at least 1958).

He also did many covers for pulp magazines, illustrations for magazines and children’s books, advertisements and fashion drawings.

In 1957, he began work with Stan Cross on 'Wally and the Major' and took over when Cross retired. He continued exclusively on this strip until 1979.

Lyon painted traditional oils and watercolours, particularly bush landscapes of the Burragorang Valley, which is now flooded by the Warragamba Dam.