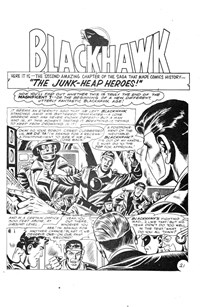 Starkman grew up in the Bronx and Queens, New York, the youngest of two children born to Irwin (or Irvin) and Evelyn. His father, a Yiddish-speaking Polish emigrant, was a milliner for a hat company. His mother was born in New York; her parents were Russian. He served in the navy in the first world war from 1944 to 1946.

Starkman possibly began work at DC in some production capacity after the war. He was a prolific letterer from 1955 to 1967, although none of his lettering was credited at the time.

After his lettering career ended, he worked in advertising typography for a time. His passion was photography and his photos won numerous awards. He started a company, PicTours where he took amateur photographers on a photo trip, with a workshop in a specially equiped van on the way to the site.