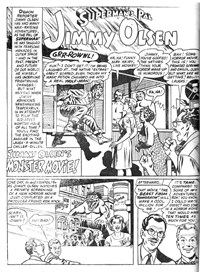 George Klein was an American comic book artist, cartoonist, and fine artist whose career stretched from the 1930s and 1940s' Golden Age of comic books. He was best known as an inker for DC Comics, where he was an integral part of the Superman family of titles from 1955 to 1968, and for Marvel Comics, where he was the generally recognized, uncredited inker on Jack Kirby's pencil art for the landmark comic book The Fantastic Four #1. (Biography from GCD.)

Some reports state Klein was born in 1920.