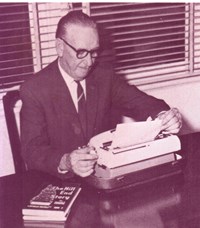 Hodge was born at Hill End, a gold mining town in central west NSW, the grandchild of men who had sought their fortune there during the gold boom. Aged 11, he moved to Bathurst for high school and subsequently became a teacher. Attending night school while teaching in Sydney, he graduated with a Bachelor of Economics in 1931.

Before the war, Hodge contributed newspaper articles and wrote “Death in the Morning” (1938). On his discharge from the military he contributed to Camp Pie, a collection of military cartoons.

He also wrote two pulp novels, Mesa Gold (Associated General Publications, 1945) and Speedway Vendetta, the result of a bet with a colleague about whether they would be accepted for publication.

Hodge retired in Newcastle in 1966, but lived part time in Hill End while researching his three-volume history of the Hill End-Tambaroora goldfield in the late sixties. He also wrote A Guide to Historic Hill End.

The State Library of NSW holds papers for Hodge's Hill End history (see archival.sl.nsw.gov.au/Details/archive/110312229). Thanks to Lorraine Purcell, Convenor, Hill End & Tambaroora Gathering Group, for some information in this biography.