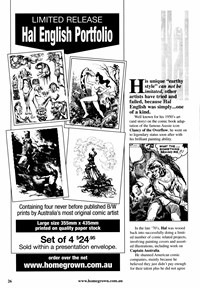 Born as one of five brothers in north-west NSW, English left school aged eleven to help support his family. He did a variety of rural jobs, including working on sheep stations, as a wool presser and on a fishing trawler. Although a self-taught artist, he eventually moved into commercial art, working for printing houses and advertising agencies.

In 1939, English provided illustrations for a series of reflective text pieces by Burton Reynolds in The Sun (Associated Newspapers).

English also drew illustrations for the Australian Women’s Weekly and Woman’s Day. He produced an wide range of commercial artwork, including sports cartoons, pin-ups, TV story boards, science fiction, horror and fantasy. He worked in animation with Monty Wedd and illustrated a number of Little Golden Books for children in the early 1970s, focused on Aboriginal stories.

English also painted watercolours and oils of outback landscapes, with some used for Dalgety calendars.